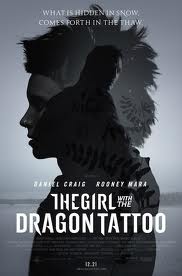 When a director and screenwriter adapt a wildly successful novel, the challenge is to make the audience forget about the novel they loved so much. THE GIRL WITH THE DRAGON TATTOO is not an easy novel to adapt. It's got loads of layers and characters who interact with each other, yet move in separate universes for a lot of the book. The book's fan base is another difficulty. It's like adapting a Harry Potter or Twilight novel– fans know the books inside and out. Count me among those fans. So, I'll gauge the fan's reaction by my own. No director can take on a challenge like this as well as David Fincher. He earned the reputation with Zodiac and The Social Network. So it was natural to go to him for the film adaptation of the first of Stieg Larsson's Millennium Trilogy. And whoever made that call deserves a raise, because Fincher once again knocks it out of the park. When the movie began I was comparing every scene, every word of dialog to the book. That didn't last long. I was so involved in the story, the acting, the look of the film that I forgot about the novel. First the look. Cinematographer Jeff Cronenweth creates a beautiful tableau. Sweden is gray and cold, just like the film. The acting is first rate and Christopher Plummer, Stellan Skarsgard and Robin Wright are wonderful. Daniel Craig is perfect as MIkael Bloomqvist. Craig brings an intensity to every role. And that intensity serves to convince the audience that Bloomqvist is more than just a competent journalist. But the real discovery here is Rooney Mara. Fincher had to fight to get her the role and he was absolutely right. Mara is perfect, even more perfect that Craig is for Bloomqvist. She completely nails the innocence, intelligence, seething anger and reserved beauty that is Lisbeth Salander. Awesome doesn't begin to describe Mara's talent in this role. I thoroughly enjoyed TGWTDT. I'm sure it will get its share of nominations. But first among them should be Mara and she should take home at least one statue. — Alan Yudman