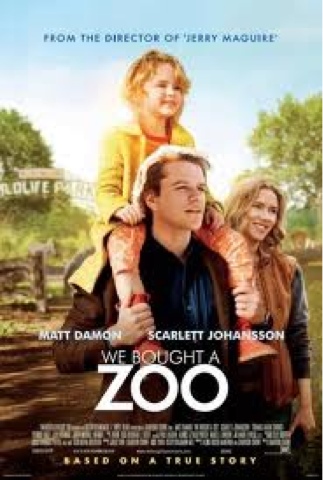 Bullshit. And lion shit, tiger shit, monkey shit… No matter the
source, this slab of overcooked meatloaf comes straight out of the
Hollywood Product mold. A complete bait-and-switch, you go expecting a
peaceable kingdom adventure, but instead get a hackneyed family crisis
(mom's dead, son can't cope, fights with dad) that dominates the film
at the expense of hoof and hide. It speaks to Matt Damon's
professionalism (and enormous likability) that even in crap like this,
he gives his all; truly, had Matt not starred, I would have walked
out. But this is still an unredeemable project. Damon's co-star,
Scarlett Johansson, brings nothing to the table. Good actors like
Patrick Fugit (still waiting for the role that will capitalize on his
marvelous turn in ALMOST FAMOUS) and Angus Macfadyen are wasted. Only
John Michael Higgins shakes the movie awake in his two brief scenes as
the “evil” inspector. A split verdict on the kids who play Damon's son
and daughter. The little girl is overly precious and too good to be
true. The boy, however, Colin Ford, keeps as much of the melodrama
inside him as the director will allow and emerges as the film's one
small shining light. — Jeff Schultz