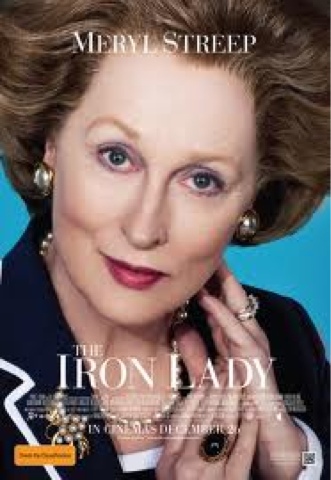 This isn't just a vehicle for Meryl Streep, it's a sleek yet stolid
Jaguar that cruises (too quickly) past the highlights of Margaret
Thatcher's political career, but always circles back to its central
concern, the evaporation of Thatcher's mind in the twilight realm of
onset dementia. The movie is as much clinical study as bio-pic, and
when Streep tries to recapture a thought or hang onto clarity even as
it recedes, she becomes worthy of her legend. Actors are sometimes
said to “disappear” inside their roles: here's a prime example, and
here, too, Meryl's talent is equalled by astounding old-age makeup.
(And multiple hairdos, old and young, to beat the band.) As biography,
we get only a rushed, superficial chronology (Finchley election,
Falklands War, IRA bombing) which barely mentions actions Thatcher
took as PM for which she is still reviled by those who hate her,
actions such as privatization and her relationship with the unions.
And the run-up to her fall from power appears almost out of nowhere
and is so abbreviated you're left with the impression that her
government staged a mutiny because she was especially cranky one day
at a staff meeting. But the movie's ping-ponging between heyday and
senescence makes great sense as a metaphor for the mental inability to
stay in gear. To those for whom Streep may not be your favorite
actress because she's always maybe a bit too perfect: this one you'll
like. — Jeff Schultz