The third installment in this series took long enough to get made. But its understandable that Barry Sonnenfeld, Will Smith and Tommy Lee Jones would want to wait. The MIB 2 was lacking the charm and a lot of the humor of the original. Well, I won’t tell you that MIB 3 is as good as the first movie, but it is darn close. My expectations were fairly low, but this rose above those to treat me to a pretty good movie. Smith is still the smart-alecky, faux street wise Agent J. Years have made Tommy Lee Jones an even more surly and grizzled Agent K. If you are not familiar, the plot deals with J traveling back in time to save K and the world. I was anticipating a lot of “fish out of water” moments for J. There were a few, but not as many as I had feared and the movie stuck to the theme and J’s reason for traveling back to 1969. The humor was there. The weird Aliens and an especially evil villain ably played by Jemaine Clement. MIchael Stuhlbarg is welcome as a “good” alien who helps them save the world. The 3D is there, but unnoticeable, which means it works to make the movie visually pleasing. Is MIB 3 a great movie? Probably not. It leaves a bunch of questions unanswered and some may roll their eyes at the twist (I am not among them). But, it all worked for me and at under two hours, it was just fun. — Alan Yudman

Before the final couple of minutes, WOMAN manages to provide some cheap jumps and is a worthy rental. But then the writer apparently didn’t realize he needed an ending. One that makes sense in the realm of what came before it. One that would give us a final twist. Nope. They hit us hard in the gut with something that was ballsy and surprising. But then they completely BLOW IT in the final two minutes. I won’t spoil it here…I will allow you the opportunity to be as disappointed as I was. Nothing scarier in a horror movie than pulled punches.

Ever wonder who would win in a fight between Thor and the Hulk? What would happen if Captain America’s unbreakable shield was hit by Thor’s equally tough hammer? Who is smarter, Stark or Banner? It takes a geek to think up these scenarios and an even bigger geek to answer them on screen…thank you Joss Whedon…and that’s what makes The Avengers a blast! Every character gets their moment and the fans get everything they hoped for and then some with this ultimate payoff to the movies that came before it. And give credit to Marvel for making this work…stringing together a narrative that started with Iron Man and concluded with Captain America…laying the groundwork for this one. Not afraid to admit I had multiple geekgasms watching this (especially in 3D). Finally a summer blockbuster that deserves every dollar it earns because it caters to the audience and the fans without pandering to the kiddies or the tweens. And the final scene after the credits is genius.

This comedy doesn’t reinvent the wheel but it doesn’t have to. A funny flick that sometimes rings true and sometimes doesn’t, it still manages to keep you involved ESPECIALLY when it veers into borderline sappiness…it earns this because you like the characters and actually kinda care about what happens to them. And Kevin Hart had me in tears every time he opened his mouth. This MAN THINKS this one is a winner!

At about a buck-15 (not counting the endless credit roll), the movie
is not much longer than the trailer, but it’s funny throughout. Yes,
the targets are easy, and yes, Sacha repeats himself, and yes, as soon as you see love interest Anna Faris’ Organic Food Collective you know Admiral General Aladeen will ultimately become enlightened. But
getting there is fun, especially when Aladeen argues with his enemy-
turned-sidekick Nadal (One of their exchanges in particular, involving
Aladeen’s rape of three members of Menudo, is priceless.) There’s a
speech at the end about dictatorship which is a not-even-thinly veiled critique of the American empire — over-obvious, sure, but still a bitterly effective summing-up of our sorry times. Plus, more comic
cameos than you can count, with first-among-equals Bobby Lee as a
corrupt Chinese official who mocks his wife to her face in English,
because she doesn’t understand a word. This is the sort of comedy
that, when it shows up on tv and you’re surfing, you’ll stop and watch
it again, maybe even to the end. — Jeff Schultz

This movie should have sucked. A comedic remake of a hit drama from the 80’s starring two actors, one you’d never peg for a funnyman. Not only does it work, it is one of the funniest flicks of the year. Jonah and Tatum have fantastic chemistry together, Ice Cube is gleefully furious as the “angry black police captain” and the laughs come from a very welcome R rating the is used to the extreme. Cameos also abound and one in particular gives fans approval to not only like this new version, but also still appreciate the original. 21 is a 10…bring on 2!

There is nothing more annoying than a movie critics lose their minds over that actually stinks. They all say CABIN is great because its fun and original. Just because a story is original does not make it good. I am still stunned at the lameness of the whole thing. It’s plays like the very long setup to a joke with a punchline that not only disappoints, but also takes the fun out of what could have been. You think the kicker must be something more clever than whats coming because EVERY CRITIC DRANK THE KOOL AID AND TOLD US THAT! Don’t believe it…Joss Whedon can normally do no wrong But now it makes complete sense why this sat on the shelf for three years. Not because MGM was going under, because they actually had brains. If it gobbles like a turkey and looks like a turkey guess what? Pass the gravy.

Only would a complete churl, after reading Alan’s rave review and acknowledging the 93% (at this writing) Rotten Tomatoes rating and the enthusiasm of the much-much-larger-than-usual Saturday matinee audience, dump on this movie. First of all, you can’t spend 220-million bucks and not get a lot of spectacular. The budget is the point; the stars are the effects. But after X-Men and X2 and Fantastic Four and Silver Surfer and the individual Irons and Captains and Hulks, the characters, the team concept, the explosions and fights and flying things and mythologies and MacGuffins are, hate to say it, been there, seen that. Yes, all of them have the FX wow-factor for which
Lucas and Spielberg changed Hollywood forever. But is there a sequence in this one so eye-popping you just have to go back and see it again?
A nice town collapse at the beginning, yes, but watching it, I
thought, oh, that effect is in the trailer for the next Batman, too.
Toward the end, there are gigantic airborne undulating metal lizard
troop carriers that impress. But otherwise, it’s standard-issue, A-
list pyrotechnics. The screenplay has been lauded for its humor, and
there are funny lines, but not enough. Many scenes are long and talky,
especially one between Thor and Loki just made for a popcorn run.
Speaking of those two, Chris Hemsworth isn’t up to the part, and was
there ever a more anemic villain than Tom Hiddleston? This little
twirp is gonna take over the world? Scarlett Johansson is colorless
(her pale personality so wrong for such a vivid genre), And Samuel L.
Jackson’s performance is a one-note samba in which he pretty much just
stands and snarls. All that said, the movie does have two standouts:
wisecracking Robert Downey, Jr. and earnest (but funny) Chris Evans.
They find real character to stuff into their Superhero drag, and
they’re the most watchable part of the 2 hour and 22 minute
production. — Jeff Schultz 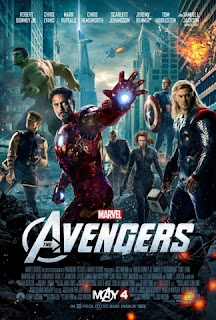 Just calling this the best superhero movie ever made is faint praise. THE AVENGERS is a great movie regardless of genre. Written and directed by Joss Whedon, the movie hits all the right notes. He brings his unique style to both the script and the look. Whedon was the perfect choice. This kind of movie had the potential to be a mess, but Whedon expertly brings all the characters in and gives them all enough to do so no one could feel slighted. Whedon’s words fit comfortably in the mouths of Robert Downey, Jr. (Iron Man) and Mark Ruffalo (The Hulk). But that doesn’t mean the rest of the cast isn’t great, they are! But Downey and Ruffalo are the brightest stars. The banter is excellent, purposeful and amusing. The effects are the best I’ve ever seen, and the 3D puts you in the movie just like Avatar did. The difference is Avengers has a superior script and cast. Some may say, “hold on, Christopher Nolan’s Batman trilogy are the best super hero movies ever made.” I would argue this difference, they are great movies and the main character happens to be a super hero. The Avengers is more comic book. It feels like you are watching the characters on the page come to life, whereas Nolan takes license with the comic to make a great action drama. But that is all splitting hairs and topics for a ComicCon panel. The Avengers is awesome. I want to see it again… like tomorrow! And the sold out crowd at 12:15 AM agrees with me. — Alan Yudman

I really expected to hate this movie. Loathed MI 2, thought the last one was just okay, and have lost interest in Tom Cruise. Didn’t matter, this flick was incredible! Breathtaking action, a story that moves, great chemistry between the cast, and Cruise allowing himself to NOT be perfect in this one add up to one of the best thrill rides I have seen in a long time! Even on the small screen the tension and stunts are just awesome. Here’s hoping this is the template for all future Tom Cruise movies because this formula worked big time! Mission accomplished! — Stormy Curry

Easily one of the best, if not the best action movie of the year, MISSION IMPOSSIBLE: GHOST PROTOCOL might also be the best of the four movies based on the 1960’s TV series. It blends excitement, humor and edge of your seat drama better than any of the previous three. The original Mission Impossible movie was good, but it took about two or three viewings before I understood exactly what was going on. Once I did, though, I thoroughly enjoyed it. Ghost Protocol is less confusing, less “twisty”, and much more human and funny. One thing I find annoying about movies that rely on the characters using high tech equipment is that the technology never breaks down. In this film, even the tech isn’t always reliable, breaking down at the most inopportune times. That makes the movie more enjoyable, more real and sometimes is the match that lights the fuse of drama or humor. Director Brad Bird brings a straight forward sensibility to storytelling that grew out of his work in animated films. Tom Cruise is Tom Cruise, which in this case isn’t a bad thing. Special kudos to Simon Pegg and Jeremy Renner who are great in supporting roles. If they’re going to make another MISSION IMPOSSIBLE, please keep this team together! — Alan Yudman