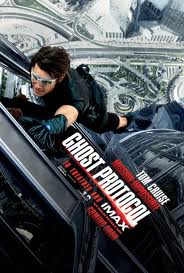 I really expected to hate this movie. Loathed MI 2, thought the last one was just okay, and have lost interest in Tom Cruise. Didn’t matter, this flick was incredible! Breathtaking action, a story that moves, great chemistry between the cast, and Cruise allowing himself to NOT be perfect in this one add up to one of the best thrill rides I have seen in a long time! Even on the small screen the tension and stunts are just awesome. Here’s hoping this is the template for all future Tom Cruise movies because this formula worked big time! Mission accomplished! — Stormy Curry

Easily one of the best, if not the best action movie of the year, MISSION IMPOSSIBLE: GHOST PROTOCOL might also be the best of the four movies based on the 1960’s TV series. It blends excitement, humor and edge of your seat drama better than any of the previous three. The original Mission Impossible movie was good, but it took about two or three viewings before I understood exactly what was going on. Once I did, though, I thoroughly enjoyed it. Ghost Protocol is less confusing, less “twisty”, and much more human and funny. One thing I find annoying about movies that rely on the characters using high tech equipment is that the technology never breaks down. In this film, even the tech isn’t always reliable, breaking down at the most inopportune times. That makes the movie more enjoyable, more real and sometimes is the match that lights the fuse of drama or humor. Director Brad Bird brings a straight forward sensibility to storytelling that grew out of his work in animated films. Tom Cruise is Tom Cruise, which in this case isn’t a bad thing. Special kudos to Simon Pegg and Jeremy Renner who are great in supporting roles. If they’re going to make another MISSION IMPOSSIBLE, please keep this team together! — Alan Yudman