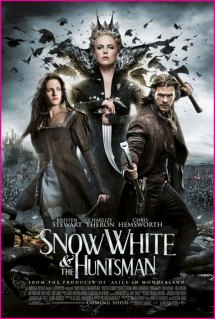 I really want to like Kristen Stewart. I think she has the potential to be a good actress. But with material like this, she has made a poor choice and one that won’t do anything to advance her career. At such a young age, she is in danger of becoming Kevin Costner. She takes on an accent to play Snow White (why are all medieval kingdoms British?) and it sometimes slips. She’s also overshadowed by Charlize Theron who is a very evil Queen indeed. Stewart just isn’t very good in this. While SNOW WHITE AND THE HUNTSMAN is a fairy tale, it asks to suspend just a little too much disbelief. Snow White goes from scared girl to avenging warrior in the blink of an eye. There huge holes in the plot. Things appear out of nowhere with little explanation. At some points I wanted to take a bite of the poison apple myself if only to get it all over with. It’s not a horrible movie, but it could have been so much better with a better script and a more capable director. — Alan Yudman

There’s something off-putting about Kristen Stewart’s mouth. It has a permanent sneer, whether or not she’s showing disdain, even in repose. She’s a capable actress who has contributed to interesting movies like ADVENTURELAND and WHAT JUST HAPPENED. But (thanks in part to that sneer) purity and innocence are not her strongest suits. That’s why she’s miscast in this inflated fairy tale retelling, which, to be fair, asks her to be as much Joan of Arc as unsullied maiden. This one major flaw aside, SWATH has enough movie magic and sumptuous production design to carry it through most of an overlong two hours-plus, complete with an enchanted forest, seven (initially eight) dwarfs, stoic Chris Hemsworth, and villainous Charlize Theron literally sucking the life from young girls to remain beautiful. Medieval battle scenes by now are so familiar as to be interchangeable, and first-time director Rupert Sanders (who gives a rookie a $170-million project?) brings nothing fresh to the screen in that respect. Sanders also botches two key moments at the end: Theron’s inevitable demise is almost kissed off where we expect a paroxysm of vengeance. And Hemsworth, for all he’s accomplished throughout the film, is dispensed with in a final, ambiguous reaction
shot. Kudos, though, to Universal, for staying true to the dark material. — Jeff Schultz