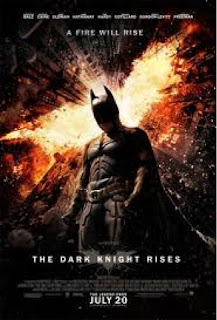 There are some trilogies that end perfect (The Return of the King), some that are awful (Matrix Revolution) and some that have their flaws but wrap everything up in a satisfying way without alienating fans (Return of the Jedi). That is where The Dark Knight Rises lands. While The Batman is a cool character with a lot of gadgets, the series has always been about Bruce Wayne…and fittingly that’s the focus of the third installment. Wayne’s crash and burn then eventual rise from the ashes is the real point of the movie. He meets his match (in many ways) in Bane…another masked man who also feels justified in his actions. Bale and the rest do great but it’s Michael Caine who ends up being the heart of it all. His plea to Wayne to stop his downward spiral and find happiness in life along with later scenes carry more punch than most of the big budget action scenes. I really liked how Nolan wrapped things up and brought everything full circle with key elements from the first two films. The movie is long but doesn’t feel like it. Everyone considers “The Empire Strikes Back” the best of the Star Wars trilogy but still love all three. “The Dark Knight” is the Empire of the series…but all three movies succeed. Bravo. — Stormy Curry

When your main villain’s face remains fully three-quarters covered by a device that looks like it’s meant to cure sleep apnea, there’s not a lot of room to act. Is it really Tom Hardy playing Bane? With that metal walrus contraption and a voice that sounds looped by a Sean Connery impersonator, who can tell? Pit Bane against Batman and you get two expressionless actors. At least Hardy has an excuse. But Christian Bale comes off as a self-important drag. Watch Bale in his scene with Joseph Gordon-Levitt, another quiet, serious actor, but one who always pulls you in. G-L eats Bale’s lunch. Yes, Batman the character is dead at the center before he regains hope and purpose, but in scene after scene, it’s the other actors, not Bale, whom you find yourself watching: grand old Michael Caine, the infallible Gary Oldman, and especially Anne Hathaway, who’s almost in a different movie and is pretty much the only one who seems to be having any fun. (Marion Cotillard’s career continues to mystify.) If “bleak” is what Christopher Nolan was going for, the final installment doesn’t come close to his last (with Heath Ledger) or Tim Burton’s first. We wait what must be an hour and a half or so before the Big Effect: the semi-destruction of Manhattan. Nothing in the sequence rises to the evil of the catastrophe (or to anything in INCEPTION, for that matter) — especially since the promised nightmare doesn’t bring down a single tall building. I’m guessing Nolan or Warner Brothers felt that would be too disturbing, even eleven years after 9/11. But it’s a pulled punch in a screenplay that clearly taps into the fear of terrorism. Hans Zimmer’s pounding, forgettable score doesn’t help. And the MacGuffin: a nuclear bomb with a timer that counts down as the movie hurtles to a conclusion. Seriously? There were “Man from U.N.C.L.E.” episodes with better climaxes. — Jeff Schultz

One of the themes of Christopher Nolan’s Batman trilogy is fear. Using fear or succumbing to fear. That said, I was fearful of what I would see up on the screen as I prepared to watch THE DARK KNIGHT RISES. Would it be as good as The Dark Knight? Or would it go down the Sam Raimi road as in Spider-Man 3 and be a total disaster. My fears were unwarranted. While TDKR is not as good as The Dark Knight, it is still an excellent movie. The final installment of the trilogy returns to themes first seen in Batman Begins. Bane (Tom Hardy) is a disciple of Ra’s Al Ghul and wants to finish what Al Ghul was unable to in the first movie, the “cleansing of Gotham City”. Batman will have none of it, but he also has met his match in Bane. While he was able to pummel all comers into submission using his Ninja skills, Batman has met his match in Bane. And how he overcomes this and saves the day (or does he?) is the arc of this film. Nolan is expert in epic filmmaking. He knows spectacle, but doesn’t forget story as he stuns his audience with visual tricks. I won’t go into how great Christian Bale, Michael Caine, Gary Oldman and Morgan Freeman are. They were great in the first two films and that continues. The new players are what everyone wonders about. Marion Cotillard, Tom Hardy, Anne Hathaway and Joseph Gordon-Levitt each bring important pieces to the puzzle and each character gets his or her moment to shine or get a shiner. One small complaint, it was sometimes hard to hear what Bane was saying through his mask. But that is minor. Yes, this is almost three hours long, but it didn’t drag and didn’t feel that long. And thank you for not converting it to 3D. Not everything has to be 3D to be spectacular. Thank you Christopher Nolan for reminding us of that and for your incredible talent. This version of The Dark Knight rises above much of the rest of the schlock that passes for blockbuster entertainment. This movie will break box office records, and it deserves nothing less.

MIB III is a fun yet completely unnecessary sequel that reunites Tommy Lee Jones, Will Smith, and lots of yucky aliens. But the best special effect of them all is Josh Brolin. The time travel story allows Brolin to not just impersonate a younger Jones, he BECOMES him. It’s that burst of freshness that keeps Men from just being a typical sequel. The other Jones seems to have just punched in for his paycheck, Smith is his usual fun self, and the big bad is disgusting (that’s a compliment). Aside from Brolin, MIB III is fast food: tastes good in the moment, forgotten soon after.

Not as funny as Borat but much better than the putrid Bruno, you get your moneys worth with this Dictator. From the opening frame (a picture and dedication “in loving memory” of Kim Jong Il) to the closing credits, there are plenty of gut busting moments. Some of those moments include a decapitated head, a POV shot from a baby as its being delivered-did I mention there’s a cell phone in there with it? Plenty of one liners (are you having a boy or an abortion?). Sacha Baron Cohen proves he can shine in a standard comedy and takes full advantage of the R rating. If you don’t nitpick the razor thin plot, The Dictator will keep you chuckling hours after seeing it.

If you are not already geeked for the finale of the Dark Knight trilogy, this is sure to get you amped. Watch and enjoy the anticipation for June 20! 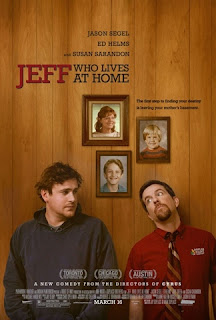 JEFF is a funny and touching movie that in my opinion is one of the years most overlooked. Jason Segel injects a sweetness into his role as Jeff, a slacker who sees the movie “Signs” (yes, the Mel Gibson movie) as an inspiration for his slacker life. You have to see it to fully understand it. The real surprise is Ed Helms, who plays Jeff’s complete tool of a brother. I expected a twist on his goofy character from Hangover and The Office but instead got something more. He does a great job at playing a class A D-bag. My only complaint is the Susan Sarandon storyline which feels like the only forced and phony thing in the film. Anyone who’s ever looked for meaning in life, pondered coincidence vs. fate, uttered the words “everything happens for a reason”, or had a brother will relate to and enjoy this gem. Do not miss. — Stormy Curry

The first hour is a silly, shameless romp — COCKTAIL meets FLASHDANCE. Then the plot kicks in, and you might as well rename it SHOWBOYS. The undeniable charms of sizzling young men (and one ageless Adonis) with sicker bodies than Olympic swimmers fulfilling the dreams of the secretarial set at a Chippendales-type nightclub work beautifully as long as director Soderbergh keeps his film about nothing more than the depiction of a world just barely outside social norms, yet completely likable because the characters seem like such stand-up guys. That first hour is the very definition of a feel-good movie, and I remember thinking: I’m enjoying this so much, please Steven, don’t fuck it up with “complications”. Alas, the screenplay sees fit to darken the story with drugs, turning the movie’s male ingenue, Alex Pettyfer, from lovable loser to overconfident asshole in the space of a couple pages, leading to superfluous violence, unconvincing sacrifices, and a fatal change in tone. Through it all, Channing Tatum proves yet again that he can take the thinnest material and flesh it out with the flesh and talent a benevolent God gave him. He never overplays or hogs a scene; neither does he go the easy route of the “strong, silent type”. I would go so far as to say that Tatum and another, very different actor just one year his junior, Joseph Gordon-Levitt, are the two most promising of their generation. — Jeff Schultz

I love raunchy politically incorrect comedies that thumb their noses at authority…as long as they’re funny. Project X is billed as the ultimate party movie but feels more like the dry heaves one feels after such a party. Besides the “found footage” cliche that almost never works in movies, Project is a Frankenstein’s monster of stitched together parts of much better movies. Getting laid before graduation? Every teen comedy ever made. Parents leaving trusted son in charge of house? Hi Risky Business! Best friends lying drunk in the yard proclaiming their love for each other? Jonah Hill showed how it was done in Superbad. I was looking forward to a mindless 90 minutes of stupid fun…they forgot the fun part. The filmmakers bulldoze over reality about a third of the way in taking you completely out of the film, the main characters are as exciting as the bottom of a warm keg, and the adults act like they would if a 15 year old wrote the screenplay…which based on what I saw is a possibility. Bottom line: X gets an F.
Stormy Curry