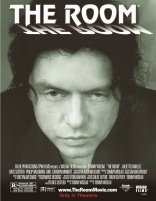 Yes, of course it’s bad. Horribly, awfully, undeniably bad. But does it rise to the level of so-bad-it’s-good? Not to me. Early in the game (that is, immediately), we see and hear that this is crap. Everyone in the cast is amateurish. The camera is usually in the wrong place (the extreme close ups are painful), editing is sloppy, with unstable tone and meaning that can change within a single sentence, etc. Seemingly the main joke is that lead actor/creator Tommy Wiseau is oblivious to how bad he is and is so earnestly shitty that the ludicrousness of it all earns our attention. Well, perhaps: I admit, I saw this at home by myself on DVD — not at one of the midnight, audience-participation screenings that have turned it into a cult fave. In that setting, people say it’s hilarious. Greg Sestero, who plays Wiseau’s rival in love, wrote a the-making-of book about the production which has been optioned by James Franco. Whatever meta-pretzel that turns into promises to be far more interesting than the real thing. — Jeff Schultz

There are movies that are so bad that you have to watch them just so you can say, “yeah, I saw that…. 2 hours of my life I’ll never get back”. THE ROOM is just that kind of movie. It’s billed as a “black comedy”. All the humor here is unintentional and at the filmmaker’s expense. The plot is pretty simple. Johnny and Lisa are engaged. Johnny is loving (even though his accent and long hair make him appear to be a Bond villain), Lisa is a manipulative bitch who doesn’t love him anymore and wants to sleep with Johnny’s best friend Mark. Wait, didn’t I see this on “Days of our Lives” in the ’80’s?  That’s it, that’s the plot. Oh, but the execution. That’s where this goes from simple to simply horrible. Characters just all of a sudden show up with no explanation. Then they disappear just a quickly, never to be seen again. The dialogue is wooden and at times makes absolutely zero sense. The acting is well, some porn actors are better (not that I’ve ever seen any). And speaking of “porn”, there are soft core sex scenes sprinkled throughout the movie that are scored like some power ballad by a failed ’80’s hair metal band. You should wear a neck brace to guard against the sudden turns the movie takes without warning. In one scene Lisa’s mom drops a bombshell about her health in the middle of a conversation like she’s talking about the weather. And Lisa reacts like that’s exactly what her Mom just told her, “Dear, it’s going to be sunny tomorrow”. Then there is the 18-year-old kid who is Johnny’s charity case, paying for his school and apartment. And we’re supposed to believe Johnny’s doing this just because he’s a big softie. Oh, and footballs. The guys are forever tossing around a football for no apparent reason, I suppose because “that’s what guys do when they get together”. It’s inexplicable. Then, in the final scene the whole thing takes a huge turn that really makes no sense whatsoever. Maybe you could watch this and play a drinking game.. take a shot every time Johnny laughs like an idiot or Lisa acts like a bitch. Better yet, drink before you see THE ROOM. I probably should have, it would have been easier to swallow. — Alan Yudman