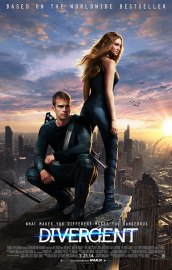 It is quite unfair to DIVERGENT. Most people are comparing it to The Hunger Games. A story about a dystopian future society where people must compete to survive and strong female character as the lead. As comparisons go that’s about as far as anyone should go. Shailene Woodley is a fine actress, but she is no Jennifer Lawrence. Ashley Judd and Tony Goldwyn are nice supporting actors, but really? They cannot compare to Woody Harrelson, Stanley Tucci, Elizabeth Banks, Donald Sutherland, etc. In “the city” there are five factions. Woodley grows up as part of the selfless group that helps everyone and runs the government. Each teenager takes a test to see which faction to which they belong. You can go against the test and choose one of the other factions. Choice is apparently important. But some get no results from the test, they are classified as Divergent and a threat to the order of society. Woodley is Divergent. She also chooses to join the warrior faction rather than the one in which she grew up. Confused yet? I was not totally lost because the film does a decent job of spelling things out, but when they start casually referencing the factions by name it can be difficult to keep track. Woodley is fine Everyone is fine. Maybe that’s why it doesn’t seem to be sticking or making me think. It doesn’t break ground, it doesn’t take risks. It’s just a better than average futuristic sci-fi adventure. And there is nothing wrong with that. — Alan Yudman