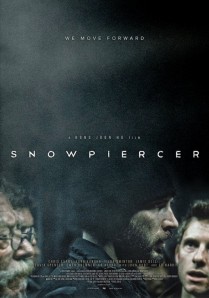 When an attempt to combat global warming accidentally leads to a deep freeze that kills virtually all life on earth, the remnants of humanity live on an enormous train in a well-demarcated, military-enforced division between the 99 percent, including our hero rebels, and the privileged class. The poor and downtrodden ride in the rear cars, the 1% in the cars farther front. The movie follows the rebels as they work their way car by car toward the “sacred engine” and its genocidal, dictatorial creator, whom they mean to kill, but without whose invention running everyone must surely die. The premise is clever enough, but it steps close to silly when we realize just how big this train really is — not just packed with hordes of maltreated peasants, but an army of troops as well, and, for the benefit of the rich, such things as an insanely high-tech aquarium, an orchard, a disco, a two-story lounge, a spa with hot tubs; it’s Supertrain. And it literally runs nonstop around the entire world including over oceans on a single loop of track that spans continents. I mean, you really really have to suspend disbelief. An almost unrecognizable Chris Evans leads the insurgents, who include wisecracking hothead Jamie Bell. John Hurt is their elder statesman. Octavia Spencer is the black character. And there’s a strenuous, over-dramatic Tilda Swinton performance that makes you wish they had cast someone else. Late in the picture, Ed Harris appears and does what he can. But as for the resolution? Well, let’s just say it didn’t melt my heart. — Jeff Schultz