The only horrible thing about this movie is the timing of its release. Cops takes its premise and runs with it and the results are a lot of fun. If it had been PG-13 this would’ve been just awful but armed with an R, Jake Johnson and Damon Wayons #2 go places you don’t expect joke wise. ..which makes it even funnier. Keegan Michael Key also brings it in a part that could have been a throwaway one. Instead it only adds to the party. Cops doesn’t try to be anything more than funny and if it did it would suck. Go and laugh, that’s the point.– Stormy Curry

During the six years (and just getting started!) of this site and my part in its thousand-odd reviews, I can’t remember ever describing a movie as perfect. Every scene, every shot, every performance, every line — perfect. Until now. Michael Winterbottom and his two stars whip up (or actually, cut down: the feature is a reworking of Season Two of their tv series) what tastes like a light, frothy soufflé — even as, amid all the joking around (and the jokes are nonstop, from start to finish), there’s a meat and potatoes theme. The beating heart of the movie — is death. Issues of mortality. How will I be remembered after I die? Will I be remembered? What does it matter? Because Steve and Rob are in the land of Byron and Shelley, with attendant visits to graveyards and memorial plaques amid other, too-many-to-mention drop-dead Italian settings, the musings seem natural. But always a-musing. No, funnier than that. I started laughing out loud before a minute was up and it just kept on. For starters, there are double the impersonations as the first one. The sequel’s “Michael Caine” moment is probably the comparisons of Tom Hardy and Christian Bale’s separate unintelligibility in THE DARK KNIGHT RISES. But there is so much more. Al Pacino runs rampant. Hugh Grant stammers. Even Bogie comes up. And then there are those dramatic touches, so deftly handled you never think, oh, the movie just got “serious”. But it still manages to show us intimacies (Brydon’s slightly strained relationship with his wife, Coogan’s achingly well-acted love for his teenage son) in that — here comes the word again — perfect way, when “acting” and “script” seem to disappear. — Jeff Schultz

Steve and Rob are back. The jokes are back. The impersonations are back. It is THE TRIP redux, only this time it is THE TRIP TO ITALY. If you haven’t seen the first movie, why haven’t you? It’s amazing. Funny, sweet, poignant. Both are based on BBC series of the same names. In THE TRIP Steve Coogan and Rob Brydon go to northern England to sample the cuisine so Steve can write an article for the Guardian. This time, Rob has convinced them to shell out for a similar adventure in Italy. The story is very similar, but the roles are seemingly reversed. In THE TRIP, Steve seems untethered, like he is having a midlife crisis. His relationship with his girlfriend is on the rocks and he has a dicey relationship with his son. Rob is grounded. In love with his wife and their newly born daughter. This time Steve seems positively stable. No real relationship issues, his son confides in him about his mother treating him like a child. Rob is at sea. His phone conversations with his wife are short and she seems uninterested. So it’s Rob that strays in this film. The focus in the first film is Steve. Rob is more the centerpiece of this film. That makes it different, but no less wonderful thanks to the talents of Coogan and Brydon and the marvelous director Michael Winterbottom. If you are unsure about the film, just go see it for the scenery. Italy is absolutely gorgeous and Winterbottom is painting a love story to the countryside. The pair listen to Alanis Morrissette while driving across Italy. Initially I thought “really”? But it works with Rob’s melancholy. This sequel is totally worth the trip. — Alan Yudman 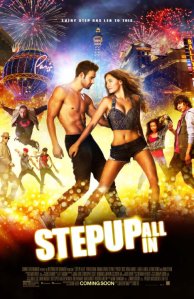 Number 5 in the hip-hop dance series is one of the best, with the happy return of “Moose” — the very talented Adam Sevani, who sat out the last one and has returned far less geeky but just as great a dancer; watch him go in an impromptu Vegas lounge solo that jumps from floor to table to bar and back. Also returning, as the love interest, husky-voiced Briana Evigan, whose dance with (returning) Ryan Guzman to Bobby Brown’s “Every Little Step You Take” on an empty amusement park ride is another high point. As is (returning) Misha Gabriel’s dance-off turn with a bottle of beer and an attitude. The screenplay is insultingly simplistic, filler between numbers (same guy wrote INTO THE STORM), but you actually kindve like the characters and feel good for them in a guilty pleasure way when they succeed. Good soundtrack, too. — Jeff Schultz

“What If” a little gem of a movie got the massive promotion and release like other movies we’ve seen this summer? “What If” Daniel Radcliffe gave such a charming and funny performance that Harry Potter became a very distant memory? In a summer of big explosions, giant robots, and 3D everything else, “What If” is a blast of freshness. This romantic comedy is in a league that’s more “500 Days of Summer” than the standard fair that’s usually put out. It doesn’t reinvent the wheel (can a guy and a girl just be friends? Sound familiar? ) But the script is smart, the dialogue sharp and witty, and the performances are right on. Everything clicks. “What If” you rolled the dice on this movie? You wouldn’t be disappointed. — Stormy Curry

Fun as long as things are being destroyed, no fun when the screenplay tries squeezing out tears. Fortunately, there are at least three gloriously disastrous storm segments — four, if you count the quick but effective opening scene. The images of tornadoes vacuuming up everything in their path — from farm equipment to barns to jetliners — are smashing, as are shots of the twisters as they form in the clouds and funnel down to the ground. Effective sound editing throws up a din in which you can distinguish both the “freight train roar” of the weather cell and the screams of victims as roofs are torn away, power lines toppled and escape paths blocked. But even at just a minute under an hour and a half, the screenplay has to figure out backstories for the cast. And so we mark time (or go get snacks) while, say, this high school boy works out his Daddy issues and that high school girl faces an academic crisis and this storm chaser defends his alleged anything-for-a-shot callousness and that climatologist Skypes the daughter who misses her, blah blah blah. There’s even an (endless) race-against-the-clock effort to rescue that high school boy and girl, who are trapped in water that reaches up to their waist!… their chin!… their nose! The acting is unremarkable (although “Veep”s Matt Walsh does what he can) and a lot of the dialog is just ridiculous — never more so than when someone asks, “Is everyone ok?” (and it happens more than once). Um, sure, I’ve been thrown violently through the air against a metal grate, debris is raining down on my head and I just watched a colleague sucked heavenward to his death, but sure, I’ll be fine. — Jeff Schultz

I was hoping to love “Guardians of the Galaxy”. I expected to like it. Nothing could prepare me for my actual reaction, which reminded me of a morning after a night of drinking cheap beer. Blech. This one tries waaaaaay to hard at everything. Overused special effects, story exposition that passes for dialogue, jokes that fall flat, no chemistry between the “characters”, an attempt to be both edgy and appeal to toddlers, predictable at every turn, I could clamor on and on….but then I would be just like this movie. I haven’t walked out of a movie in years and the only reason I didn’t this time was because of the “Marvel” brand. I kept thinking “this will get better”. Aside from the first five minutes which were incredible and Rocket Raccoon, this Galaxy blew. I am in the minority as far as my opinion goes and that’s okay. I was also alone in my thinking when a movie centered on a “Crystal Skull” came out and now most folks agree. Guess time will tell.