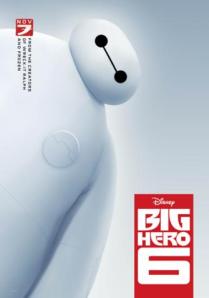 Is it just me or do a lot of Disney’s movies deal with the loss of a person close to main character. In Frozen it was the parents. Same holds true for the latest offering BIG HERO 6. Hiro is a genius kid. He lives with his aunt and his brother because, well, we don’t know what happened to their parents. Then early in the movie his brother, who is also something of a robotics genius, is killed in an explosion. But he leaves behind Baymax, a big cuddly, genial robot who is designed to be a personal health care provider. When Hiro realizes the only way to move on is to get revenge for his brother’s death he turns Baymax into a fighting robot complete with armor. Hiro also realizes someone has stolen his groundbreaking invention and is now using them for evil purposes. So Hiro puts together a super hero team made up of his brother’s friends and they go off to stop the evil. The story is better than average (thank you John Lasseter for being in charge) and the voice work is good, especially Scott Adsit (Pete from 30 Rock) as Baymax. Baymax is not just lovable because of his big cuddly appearance. The robot is sweet and caring and unintentionally funny. The real star for me here is the animation. The movement of the characters is natural and it all pops off the screen (even in 2D). Even though BIG HERO 6 deals with loss and tragedy and there’s a fair amount of fighting, it is not too intense. This should be ok for most kids. Just be ready to answer questions like, “Why can’t I have a Baymax”. The answer is you can, when BIG HERO 6 arrives on DVD or Blu Ray. — Alan Yudman

P.S. The best part of the whole night might have been the short that preceded BIG HERO 6. FEAST features an adorable boxer (?) pup and a sweet story that makes you feel all warm and gooey inside.