Steve Coogan is a comedy genius. Ok, that is out of the way. He is the star of HAPPYish, Showtime’s musing on our internet culture and how middle aged people try to deal with it. Man this resonated with me big time on several levels. One brilliant scene has Coogan in a meeting with his ad agency’s newly interested owers, two 20-something Swedes who seem to want to brand everything with a hashtag. They talk in SEO (search engine optimaztion) speak. Basically, they are saying nothing. Coogan speaks up in the company meeting, asking why every product needs a hastag or a twitter account. He uses Pepto Bismal as an example and it’s brilliantly funny and on point. That leads to a hysterical dream sequence where one of the Keebler elves has gone on a shotgun-toting rampage. It sound bizarre, and it is. But it’s also laugh out loud funny. Sometimes it comes off as just a bunch of old folks grumbling about the new world. “Hey you kids, get off my internet,” one might say. But that doesn’t make it any less true. No company seems to really know what to do with sociial media. They know it is out there. They know it is important. But they don’t know how to use it or to reshape their business model around it. That leads to a bunch of tech speak that sounds like so much baloney. HAPPYish is the stuff of brilliant social commentary and satire. It doesn’t hurt to have Coogan, Kathryn Hahn and Bradley Whitford along for the ride. I cannot wait to watch this show further find its legs and grow. The first episode is great, but it can be greater. I have confidence that is exactly what will happen! — Alan Yudman 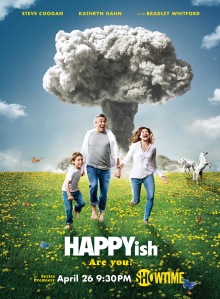