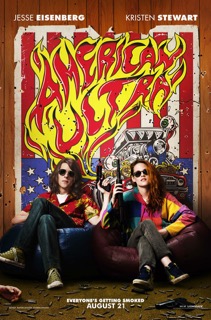 No AMERICAN ULTRA is not a new campaign to tell everyone how star spangled awesome America is (tip of the cap to Aaron Sorkin and “The Newsroom”). It is a sleeper CIA program that has been mothballed. One arm of it involved taking at risk youth and turning them in to sleeper agent killing machines. For some reason that is not fully explained (or even coherently explained) Topher Grace wants to take out the last remaining asset in the program. That asset is Jesse Eisenberg. He’s not so much a sleeper agent as he is a stoner agent. Eisenberg and his girlfriend, Kristen Stewart are a couple of potheads living in a small town in West Virginia. There is intrigue, psychotic killers employed by Grace’s CIA department (lead by the always great Walton Goggins), a love story and some killer action sequences. There is some truly funny stuff in AMERICAN ULTRA, but it is not really a comedy. It is more like the first stoner/spy/action movie. Director Nima Nourizadeh has a lot of plates to keep spinning and he does so with a fair amount of success. The set pieces are pretty standard (save one involving a Humvee and fireworks), but well executed. The editing and direction mostly keep up with the frantic, stoner vibe. One bone to pick is that a lot of the fight scenes seem to be shot close up and hand held so it is a little tough to follow who is kicking whose ass, but Nourizadeh pays off each with a comic, almost ridiculous conclusion. Grace is loathsome, Connie Britton has a nice turn as Eisenberg’s CIA handler and it’s great to see Tony Hale in anything. Here he plays Britton’s former assistant who faces a real moral dilemma and comes out smelling like a rose. There is a nice twist to the whole plot which was telegraphed a bit, but not annoyingly so. Eisenberg’s “Woody Allen-ness” plays perfectly here and feeds his stoner, neurotic vibe. Kristen Stewart continues to baffle me. She has done some good work (THE RUNAWAYS is one I’ve seen that I enjoyed), but she also has a tendency to mail it in and rely on her “tough girl/I don’t give a shit” demeanor. It kinda works here, but not completely. AMERICAN ULTRA isn’t the best movie, but it does have its moments. And at only 95 minutes, how can you really go wrong.