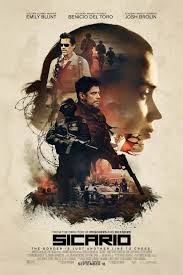 When the audience sits in stunned silence at the end of a movie, you know you have just seen something special. That was the reaction of a fairly packed theater when i saw SICARIO. Directed by Denis Villeneuve, who helmed the outstanding PRISONERS a couple of years ago, SICARIO is two hours of edge of your seat intensity. Emily Blunt is an FBI agent, head of a hostage rescue team. Her crew responds to a home in Chandler, Arizona where they are told hostages are being held by drug traffickers. They breach the house and find just bad guys and no hostages. But inside a wall they find something horrifying, bodies shoved into the frame of the house and covered up by drywall. Even veteran law enforcement officers are shocked and sickened by the discovery. Blunt is then recruited by a shadowy State Department consultant played by Josh Brolin. His pitch: to do something to get the people responsible for what Blunt found in that house. She agrees without asking many questions and is immediately whisked away to an air force base where she boards a plane with Brolin and his even more shadowy colleague, Benicio Del Toro. They go to Juarez to retrieve a prisoner from a Mexican prison who is a big deal in a Cartel. That is where the movie really hits its stride. We, along with Blunt have our eyes opened to what is really going on. Brolin and Del Toro are operating outside the law but with the knowledge and approval of politicians. That rubs Blunt the wrong way and she struggles with her role in all of this and whether they are all doing the right thing. That leads to tension filled scenes with Brolin and Del Toro and you never know if they are tiring of her complaints enough to just kill her. Blunt is great as the tough and troubled FBI agent. Brolin is effectively unlikable. But the best part of this movie is Del Toro. You cannot take your eyes off of him. His natural demeanor, his narrow squinty eyes, his slightly mumbled speech all add to his menace. You are never sure what he is going to do or how far he will go. Although, you do find out how far as the movie reaches its climax. Villeneuve pushes all the right buttons and makes all the right choices. He knows just how long to linger on a face or when to cut away and let our minds create the unimaginable. Villeneuve also once again uses the best cinematographer in the business, Roger Deakins. Deakins creates a vast wasteland of hopelessness and despair with long aerial shots of the dry as a bone landscape of Arizona and New Mexico. He also knows how to ramp up the tension by choosing the right angles and distances during tense gun battles. Add the ominous score by Johann Johannsson and you have a spectacular film that makes you think and feel about the futile drug wars in equal measure. SICARIO roughly translates to “hitman”. And in this case Villeneuve is the hitman, because he totally kills it with this excellent film.