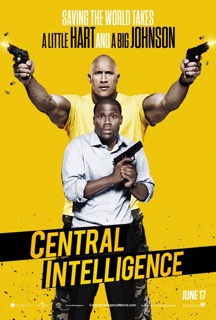 In a week when I need a laugh, CENTRAL INTELLIGENCE provided just what I needed. The Kevin Hart-Dwayne Johnson vehicle is light on plot, but long on chuckles.

What there is of a plot goes like this. Hart and Johnson went to the same high school. Hart was the most popular kid in school. Johnson was the weird fat kid. Fast forward 20 years and Hart is disappointed in his lot in life. He’s middle management, an accountant. The 20 year reunion is coming up and he gets a weird friend request on Facebook. It turns out to be Johnson, who is no longer fat, he’s well, The Rock.

Johnson is a CIA agent on the run. His bosses think he’s selling satellite codes to America’s enemies. But Johnson is really trying to ferret out the spy and he hooks up with Hart because of his “mad accounting skills”.

There’s a lot of fish out of water comedy here as Hart tries to get around the world of spying, including gunfights and beat downs. Johnson is also something of a fish out of water. He is still the insecure fat kid who got picked on in high school. He constantly seeks Hart’s approval and friendship. That is the tougher role to play here. Hart is basically playing himself, or a version of himself. Johnson is playing tough, but just “playing”. Or is he?

Aaron Paul and Amy Ryan have small roles as CIA operatives. Paul is Johnson’s dead partner. Ryan is the agent tasked with bringing Johnson in.

The story barely hangs together. But Hart and Johnson have some real chemistry. There are a lot of funny bits laced throughout and there are a bunch of decent action set pieces.

This isn’t brainy comedy. But it was kinda fun and probably worth watching again when it hits cable.