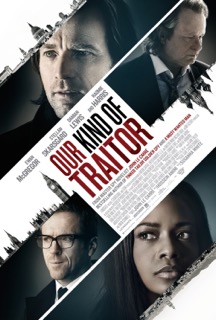 Some movies based on the works of John le Carre are difficult to fathom. I think i’ve seen THE CONSTANT GARDENER once and I never fully got it. Guess I need to see it again. OUR KIND OF TRAITOR does not suffer from that. In fact, maybe it is a little too accessible. A bit too easy to follow.

Stellan Skarsgard is the money man for a big player in the Russia mob. But he knows this new “Prince” is not the man his father was, a man Skarsgard had love and respect for. He knows once he signs over all the accounts he controls his life is not worth anything. So he devises a plan to sell secrets to the British Secret Service, MI6. But how to do this with The Prince’s men watching him all the time. He spots a couple at a restaurant in Marrakech. Ewan McGregor and Naomie Harris are on holiday, trying to save their marriage after he cheated on her. She leaves the restaurant to tend to business, leaving the distressed McGregor alone. The perfect target for a Russian mobster used to recruiting vulnerable men in prison.

Skarsgard turns over information to the unsuspecting McGregor, telling him to give it to MI6 when he returns to London. McGregor is a good man, an professor of Poetics with a strict moral compass. He helps Skarsgard because saving the Russian’s family is the right thing to do. McGregor turns the information over to Damian Lewis, a British agent. Then, as they say, things get messy.

There are several twists to each storyline, especially for Lewis’ character. But you see the people as they are. No one has a surprise hidden agenda. The twists are in the plot. Will Skarsgard get his family out? Will McGregor have to compromise his morality? Will Lewis be able to pull it off despite not having the support of his bosses?

Each twist is telegraphed just a bit. I didn’t think I knew the ending halfway through the film, but as each conclusion approached I figured out what was going to happen. So in the end, I was not surprised by anything. But I was entertained. McGregor, Lewis and Skarsgard stand out above the rest of a very fine cast. The cinematography by Anthony Dod Mantle has that grey Cold War tinge to it. Hossen Amini’s script is decent enough and Susanna White did a fine job keeping it all heading in the proper direction without going off the rails.

I have yet to see THE NIGHT MANAGER. TINKER TAILOR SOLDIER SPY is one of the better le Carre adaptations because the characters are so deep and complex. This plays more like le Carre light. Nothing wrong with that.