Jackhammer-relentless crude language that quickly gets old, layered over with the kind of sexual innuendo only Beavis and Butthead would laugh at, and tied to an unsubtle allegory on atheism — can you blame me for not staying to the end?

Tense and violent, but don’t expect the kind of hide-your-eyes scary where your heart is racing and you’re gasping for air. None of the bloodshed in this cat and mice drama has the glorious kick of a Tarantino or Sam Raimi (who executive produced). In fact, the killings and what-you-think-are-killings step away at the last moment from the kind of gutting shockers they should be. But then, it’s not a slasher movie, it’s a thriller, and decent enough; but to borrow a joke from “Saturday Night Live”, I liked it better the last time, when it was called 10 CLOVERFIELD LANE. It’s based on a specious premise: a blind man living in the lone house of an abandoned neighborhood wasteland in Detroit keeps a well-publicized $300,000 at home instead of depositing it in a bank. But whatever. That’s what brings the would-be robbers to his door, and much credit to the filmmakers for jumping right in, with very little set-up. But enough to tip you off that there’s going to be a treacly ending… which fortunately has a satisfying twist. (Sequel title: DON’T TAKE ANOTHER BREATH). Definite nods to makeup for making Stephen Lang even more fearsome than he already is, to the camerawork for its gliding shots (reminiscent of PANIC ROOM), and the terrific sound design.

There have been plenty of good animated movies, but Pixar has owned the high ground of tugging at the heart strings without being too sappy. KUBO AND THE TWO STRINGS is the latest from Laika, the studio that produced CORALINE. Pixar better keep an eye on their rear view mirror because Laika is coming fast.

Kubo is a young boy who is rescued from his evil grandfather by his magical mother. In the process, his mother suffers a severe brain injury that leaves her at times catatonic and at others fully present. Kubo goes to the nearby village to tell stories using his magical shamisen (three stringed guitar-like instrument). He makes paper dance and form origami characters to help tell the story. But the story is not just fanciful. It becomes apparent that it is his story. His grandfather took one of Kubo’s eyes and wants the other one. Kubo stays out after dark one day, something he is not supposed to do because that is the only time his grandfather and his mother evil sisters can find him. The sisters find him and try to capture him. His mother uses the last of her magic to allow Kubo to escape.

That is where the adventure begins. Kubo, a monkey and a beetle-man must find a magical suit of armor which is the only thing that can save him from his grandfather. They travel through snow, across a lake and desert to find all the pieces.

This is 3D stop motion animation and it is absolutely beautiful. I couldn’t even tell. I thought it was hand drawn until in the closing credits you see the artists creating one of the creatures Kubo has to fight. The scenes are spectacular and the facial expressions of Kubo and Monkey are nearly human.

The film stars the voice talent of Charlize Theron, Matthew McConaughey, Ralph Fiennes, Rooney Mara, George Takei and Art Parkinson as Kubo. They all do a fine job. McConaughey is able to tone down his McConaughey-ness just enough to be effective as Beetle. Who is Art Parkinson? He’s the 14-year-old who played Rickon Stark in Game of Thrones.

The story is about family and knowing your story and living your destiny. It is powerfully told but does not bludgeon you over the head. Major kudos to screenwriters Marc Haimes and Chris Butler. Director Travis Knight brings it all together in a simply spectacular film. The race for Oscar should be between this film and FINDING DORY. This is superior by a lot. It’ is not as sappy as Dory and a far greater technical achievement. The film is appropriate for children. It can be a little scary at times, but not too intense. KUBO AND THE TWO STRINGS should be on your must-see list. 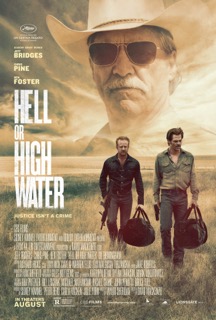 Family. Brotherhood. 99 percent versus one percent. These are just some of the themes addressed in HELL OR HIGH WATER. And they are all given a thorough vetting without any preaching on the part of the filmmakers. And that makes this film a powerful story, well told and brilliantly executed by David Mackenzie and screenwriter Taylor Sheridan.

Chris Pine and Ben Foster are brothers. A bank is about to foreclose on the family’s West Texas ranch and sell it to an oil company. Pine’s Toby has been caring for their dying mother while Foster’s Tanner has been in and out of (though mostly in) prison. They decided to fight the bank by robbing it. Several branches in an ingenious plan to take what they need but keep them off the radar of the FBI. So instead the investigation falls in the laps of two Texas Rangers, Jeff Bridges and Gil Birmingham.

There are so many genres mashed up here. Heist movie. Modern western. Socio-political drama. Can the brothers get away with their plan? Will the lawmen get their man? Will the bank get its comeuppance? It seems like it would be a mess. But it totally works on every level.

Toby and Tanner have a bond. It’s obvious and Foster and Pine play it perfectly. There is love and caring, but it is only expressed verbally once. The brothers are doing this for Pine’s sons. It is subtle, nuanced and perfect. Bridges and Birmingham have an easy chemistry. Despite the serious themes there is a lot of humor in this movie and most of it comes int he banter between the two Rangers. Is there an actor around that plays lovable and grizzled better than Bridges? As his co-stars have said, he is a national treasure. Pine and Foster are simply great. Pine has never been better and has a career outside summer tentpole films.

Bridges eventually figures out what is going on and that leads to one final bank robbery that pretty well goes sideways. It ends in a shootout and chase and lots of bullets and blood, and a bit of brains spilled.

There are no heroes here. The Rangers are doing their job but because the brothers are fighting the evil and mostly crooked financial system you don’t really root for them. The brothers are breaking the law but for a noble reason and the criminal past of Foster’s Tanner keeps the whole enterprise morally questionable.

Sheridan is a brilliants screenwriter. This is his second feature film, the first was 2015’s SICARIO which was a highly underrated and undeservedly ignored during awards season. HELL OR HIGH WATER proves there is no such thing as a sophomore slump when it comes to real talent. Sheridan meets lofty expectations. I cannot say enough good things about this film except this. HELL OR HIGH WATER is the best movie I’ve seen so far this year, and second place is not even close.

I have been enjoying Cameron Crowe’s new Showtime series, ROADIES. This has been a world that has fascinated me. I even tried to interview members of Springsteen’s crew back in the ’80’s, but couldn’t make it happen. While I have enjoyed the show, it is also enormously frustrating.

It is set against the backdrop of a tour for the fictional and apparently the one-time popular Staton-House Band. We occasionally meet House, lead singer and songwriter Christopher House. And the bass player Rick Bayless appears infrequently. But five episodes in, I have no idea who Tom Staton is other than by reputation.

The main characters in the show are the members of the touring crew. The tour manager, Bill (Luke Wilson), the production manager Shelli (Carla Gugino), one of the riggers Kelly Ann (Imogen Poots), the bass tech Milo (Peter Cambor), the audio tech Donna (Keisha Castle-Hughes), another crew member and Kelly Ann’s brother Wes (Machine Gun Kelly) and the record company’s toady Reg (Rafe Spall). It’s about how they deal with each other, the band, fans, stalkers and a host of dilemmas. Because it is from Cameron Crowe it is full of heart and a love of music.

Oh, the cameos! So far there has been Lindsey Buckingham, Jim James, John Mellencamp, The Head and the Heart, Lucius just to name a few. All have performed. It’s really quite cool. And it feels real and unreal at the same time. It feels like it could be what really happens on the road. But it also feels kind of fake.

While the writing and performances are wonderful (occasional appearances by Luis Guzman, Ron White, Finesse Mitchell and Brian Benben are treats), there is a huge hole in this enterprise. The band never plays. We never hear one note of music from the Staton House Band. There has been an arc about this one song “Janine”. We even meet the Janine it is based on. But we never hear the song. On some series such as THE WEST WING, the writer can talk about plot points or characters and even though we never see them, it works because it is not what the show is about. This show is secondarily about music and performance. They need to figure out how to do it or the ROADIES will always feel a bit less than it could be.