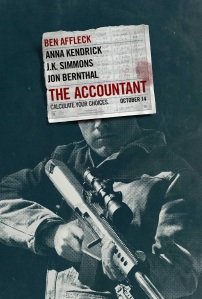 Going into THE ACCOUNTANT I expected something slightly different than what I got. I thought it was going to be a decent action thriller with Ben Affleck playing up his Batman action hero status and showing off his mad skills. What I did not expect was an attempt to thoughtfully examine the issue of Autism.

Affleck is Christian Wolff. He is an accounting savant. He can see numbers in a very “Beautiful Mind” sort of way. That has earned him lots of jobs with lots of shady people from the mafia to drug cartels to terrorists. He launders their money and keeps them rich. In return he gets paid in money and gifts. He runs this international scheme from an innocuous storefront is a Chicago suburb. Cynthia Addai-Robinson (from ARROW) is an analyst with the Treasury Department’s financial crimes unit. She is blackmailed by her boss (the always fabulous JK Simmons) into helping track down Wolff.

In the meantime The Accountant takes a job from a seemingly legit business that makes prosthetic limbs among other things. In house accountant Anna Kendrick has found a mistake in their books and Wolff comes in to find out what happened.

A third storyline involves Jon Bernthal (The Punisher in DAREDEVIL) who works for some shadowy group of mercenaries. Then there are the flash backs to Wolff’s youth where we learn how severely autistic he is and how he acquired his ability to kick major ass.

I know, I know. It sounds like a mess that would be impossible to follow. It isn’t. Director Gavin O’Connor and Writer Bill Dubuque have found a way to keep us interested in everything that is going on without the audience felling overwhelmed. The only time I got a bit lost was when Wolff tried to explain some of the financial shenanigans he was uncovering. I got the broad strokes which was enough for me. It is more an exercise in giving credibility to Wolff’s expertise than actually explaining anything.

The legit business is anything but, with John Lithgow and his friend falsely inflating the value of the company before a stock offering. That is what Kendrick uncovers and it puts both her life and the life of Wolff at risk. Thankfully we only get one “but he’s only an accountant” line as Wolff starts putting away bad guys with extreme violence and considered abandon.

Affleck does very good work here. He has to play everything very quietly. Not much smiling or emotional range because that would feel false given his role as a high functioning autistic adult. Even when he is wreaking havoc on his enemies he does so with a calm, almost detached passivity. It is very disquieting. Kendrick is good but her quirky charm comes off odd in a way I cannot put my finger on. She is underused, but I’m not sure how her character could have done more in the context of the film.

THE ACCOUNTANT is far from a perfect movie. There are a couple of nifty twists, one that I saw coming and one that was a surprise. i don’t know enough about Autism to tell whether this is an accurate portrayal of how people live with it. But it is honest and doesn’t seem to exploit it. On balance, this was an interesting film and one I think is worth your time.

Sent from my iPad