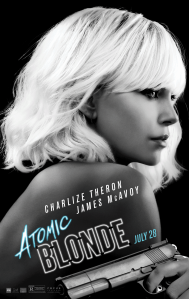 Charlize Theron is a force of nature. She imposes her will on average movies and makes them infinitely better. She is not just an Academy Award winning actress. She can take the action movie and bring that intensity and talent to the role and improve the movie. Those skills are on full display in ATOMIC BLONDE.

The movie is set in the days before the fall of the Berlin Wall. Theron is a British agent assigned to recover a list of operatives. But, she must work with James McAvoy who as they say in the film has “gone native”. It’s not clear what his agenda might be, other than making money and creating chaos.

ATOMIC BLONDE is a twisty spy thriller that is highly stylized. That’s not surprising when you find out it was directed by David Leitch who was one of the co-directors of JOHN WICK. His way of directing fight scenes needs to be copied by those who attempt to put the camera in the middle of the action. Leitch keeps the camera back a bit and that gives you a sense of place and movement. That style makes a fight scene on a set of stairs where Theron takes on a bunch of Russian bad guys one of the best set pieces I’ve seen in a while. The other signature of a Leitch fight scene is people get tired. By the end Theron and the last man standing are worn out, each having trouble even standing up. It feels (and probably is) real.

The movie is framed around the interrogation of Theron’s character after the mission is complete. She must explain how it went so sideways. The interlocutors are Toby Jones and John Goodman. The questioning is tense and Theron is particularly annoyed that Goodman, a CIA representative, is even there. I point this out because I have seen some reviewers complain that the film has Third Act problems. That it kind of goes off the rails. I would argue that the extremes on display in that act pay off a lot of what Theron is being questioned about. It is very satisfying.

Then there is the soundtrack. The film is set in November 1989. The music is a sampling of Euro-pop from the entire ‘80’s. 99 Luftballons, Major Tom (in German), Der Kommissar, Cities in the Dust, The Politics of Dancing, Cat People (Putting out Fire)… you get the idea. It’s a nostalgic treat.

The movie isn’t perfect. Sometimes it is difficult to follow who is on whose side. And one of Theron’s love interests is killed for no really apparent reason.

But Theron is so good, so tough, so empathetic that it smooths over the rough edges. ATOMIC BLONDE is just another example of a great actress at the top of her game.