I am four episodes into Seth MacFarlane’s slightly off-kilter sci-fi series THE ORVILLE, and I gotta say I am surprised. Is it perfect? Nope. But it is pleasant and thoughtful in ways I never thought I’d describe a Seth MacFarlane created show.

If you aren’t familiar with it, THE ORVILLE is a ship that is captained by MacFarlane’s Ed Mercer. His first officer is Adrianne Palicki, his ex-wife who broke up their marriage by cheating with a blue alien. The first episode was full of divorce humor and I was afraid that MacFarlane would beat us over the head with it. But he wisely chose to leave it there and move on.

Media reports said the pilot was sold as “Family Guy in space”. That is not even close to what this is. It’s sci-if adventure with jokes. Not a lot of jokes. Not everything is fodder for humor. And that works. The characters seem real (as real as aliens could possibly seem). The show is not holier than thou or preachy like Star Trek seemed to become with each new series (jury is still out on Discovery). They make mistakes, they poke fun at each other. It’s kind of a workplace dramedy set on a space ship.

But just when you think it’s just adventure and laughs it deals with real issues. In the second episode the security chief (Halston Sage), a young lieutenant who has exceptional physical strength is left in command. She is full of self doubt and unsure she is ready. But she uses the counsel of the ship’s doctor (Penny Johnson Jerald) to overcome her doubt and learn about herself.

Episode three is even better. The ships second officer (Peter Macon) is from a planet where men are the only gender. He and his partner (Chad Coleman) have a female child. The episode deals with issues like female mutilation, parenting and discrimination. And it is handled superbly. Heavy stuff for what was supposed to be a goofball comedy.

I read one review that said this, not DISCOVERY is the series Star Trek fans have been waiting for. Not sure I’d go that far. MacFarlane is still not a great actor, he may not even be a good one. But his supporting cast (Palicki, Johnson-Jerald, Macon, Sage, Scott Grimes, Mark Johnson and J. Lee) can carry the weight when he can’t. Plus, the cameos! Liam Neeson in Episode four and Charlize Theron in Episode five. I mean, c’mon!!!

So I’m in. THE ORVILLE has been a pleasant surprise. I hope it continues to grow into itself and I hope FOX gives it a chance. 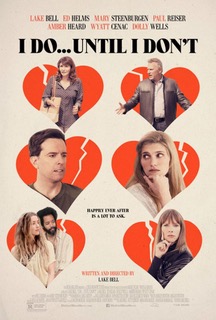 I DO… UNTIL I DON’T. That is not only the title of Lake Bell’s new film, but how one comes to feel about the movie. You like it, then eventually you don’t. This was a major disappointment for me. I was so looking forward to this after 2013’s IN A WORLD. That film was everything this is not. Original, unique, smart and funny.

There are moments in this film that made me chuckle. There were others that made me giggle or laugh lightly. But mostly it misses every mark. The premise is well, I’m not sure what the premise is. The film goes in two different directions. First we are introduced to two couples, Noah and Alice (Ed Helms and Bell) and Harvey and Cybil (Paul Reiser and Mary Steenburgen). We are lead to believe we’ll be following these two couples. One younger, facing financial hard times and trying to get pregnant. The other older, seeming on the edge of divorce. Then Bell throws Vivian (Dolly Wells) into the mix. She is a documentary filmmaker whose current project starts with the premise that marriage should be for seven years wth an option to renew. The two couples become part of Vivian’s documentary and are joined by a third couple, Alice’s sister Fanny and her partner Zander (Amber Heard and Wyatt Cenac). They are free, have an open marriage and a child and are very modern hippie-like.

So which is the narrative that drives the story? Both. And that’s a problem. When you try to tell two stories at the same time, neither gets served. There are a lot of devices that Bell uses in a attempt to draw the stories together, but it’s just not working at all. None of the emotion or tension feels earned in any way. Things just happen for little or no reason. As a result you don’t really care about any of the characters or the situations.

I could go on and on about why this was so mediocre, bordering on bad. But there were a couple of glimmers of light. It was great to see Paul Reiser working. Where has he been? Probably in TV shows or movies I haven’t seen, but he was pretty good here. Ed Helms did the best he could with the material and is also pretty good at the indie romcom leading man thing.

Ok, that’s it. That’s all there is to like. The third act is a mess. It rushes to the finish. Well, let’s just hope that this was a sophomore slump for Bell. I will say she has directing chops. That’s the one thing she does well in this film, but she cannot save her own screenplay. I Do? No, I just can’t.

Every few years Steve Coogan and Rob Brydon go on a trip and they bring along a whole movie crew and director Michael Winterbottom. Ok, they may take more frequent trips, but these come across as sophisticated buddy movies. First was 2010’s THE TRIP. in 2014 the pair went on THE TRIP TO ITALY. (Both are available for streaming on Netflix). Now they are off on THE TRIP TO SPAIN.

The basics of the movies are the same. Coogan and/or Brydon have an assignment to check out hotels and restaurants on a weeklong drive through “fill in the blank.” This time Coogan is writing a travelogue to promote a new project. Brydon is writing a similar piece for a British paper. There are not a lot of preliminaries. Coogan calls, asks Brydon if he wants to go, Brydon looks at his screaming or crying kids and quickly says yes.

The charm of these movies is the easy chemistry and familiarity of Coogan and Brydon. They have great comedic timing and play off each other so well. The jokes are there, the impressions are there. Michael Caine, Robert De Niro, Sean Connery, and some new ones… Brando, Mick Jagger and a long gag featuring Roger Moore. Interspersed with the jokes are beautiful shots of that particular country’s countryside and mouthwatering shots of chefs preparing gourmet meals. It’s a feast for the ears and the eyes.

There is also always a back story of some personal or career dilemma. This time Brydon seems very grounded and settled while Coogan is dealing with a new agent, a studio that wants to bring in a young writer to polish his latest script, his son Joe’s personal crisis and his love for a married woman. It’s a lot. They try to give Brydon something by having him take a call from Coogan’s former agent, who pitches Brydon his services. It feels thrown in and doesn’t create any dramatic conflict between the friends. That’s something that is missing in this one. There is little conflict between the too as there was in the previous two films. It’s not terrible, simply misplaced.

This one also ends with something of an unanswered question that makes you wonder if this is the final installment or they are just setting up something else.

More of the same is usually death in film. But THE TRIP TO SPAIN feels like catching up with a couple of old friends, and it is always great to see them.

Despite seeing previews for a month, I really had no idea what GOOD TIME was going to be about. But it looked interesting and had received some prestigious awards and nominations, including a Palm d’Or nomination at Cannes. Ok, that was enough to motivate me to drive through a rare Los Angeles summer rain storm to see the film. It was worth risking my car on a wet freeway.

GOOD TIME is a heist gone wrong movie on the surface. But the film has layers. Brotherly love. Family angst. Desperation to do better. And a helluva performance by Robert Pattinson (yes, from the Twilight films).

Pattinson and co-director Benny Safdie are the Nikas brothers, Connie (Pattinson) and Nick (Safdie). Nick is developmentally disabled. Connie is some kind of low level criminal who decides to rob a bank with his brother’s help. His motivation seems to get Nick out of New York to the country (Virginia). the heist seems to go off without a hitch, but the brothers are quickly found out and run. Nick is captured, but Connie keeps running. The rest of the film involves Connie trying to get Nick out of jail so they can get out of New York. Whether that is trying to con his much older girlfriend (Jennifer Jason Leigh) out her mother’s money to pay a bail bondsman, or trying to break Nick out of a prison ward in a hospital, Connie is desperate to make things work. But, no plan works. Obstacles are everywhere. Every turn is another roadblock. As the minutes and hours go by, you feel the growing desperation.

This is a meaty role for Pattinson and makes a meal of it. You can see the wheels constantly turning behind his darting eyes and frustrated grins. He is determined and focused despite everything. It’s easy to portray this character as unsure or filled with doubt. But Pattinson’s unwavering focus allows the audience to believe that he might just pull off this whole thing. Sorry, no spoilers about whether he does or doesn’t.

The Safdie Brothers have done a lot of documentaries and shorts. This is one of their first full length dramas. You would never know it. Their chosen style here is gritty and dark. The spit and polished New York is nowhere to be found. This looks like New York of the 1970’s. The French Connection New York. The New York where the city is a character. GOOD TIME is a tight 100 minutes of adrenaline fueled desperation that works on every level. I look forward to what Josh and Bennie Safdie do next.