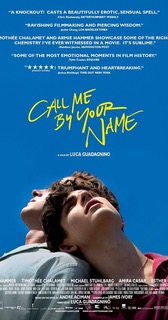 It’s only mid-December as I write this and there are a lot of “Oscar-bait” movies still to come as Christmas approaches. But, put your money down that CALL ME BY YOUR NAME will be among the nominees for Best Picture and will be a favorite. Yes, it is that good.

Luca Guadagnino has made what may be a perfect film. It is touching, engaging, funny and filled with emotion. He has taken an Academy Award worthy script by the legendary James Ivory and made it better. It’s simply amazing.

The story focuses on the evolving relationship between Elio and Oliver. Elio (Timothée Chalamet) and Oliver (Armie Hammer). Oliver arrives at the Italian villa owned by Elio’s father who is a professor of archaeology or antiquities. Sorry, not clear which but it doesn’t really matter. He has been hired as a research assistant for the summer. Elio is 17, a music prodigy who is exploring what appears to be a newfound sexuality. He is intrigued by Oliver who he tries to seduce, but is put off. Their interactions are tense and confusing to Elio, but their attraction grows stronger and stronger until their mutual desire is fulfilled. It’s a wonderful love story,

Guadagnino knows how to let a scene breathe. He allows the visuals to evolve naturally. There is no sense of urgency. It is the visual definition of languid. But it is so beautiful. The northern Italian countryside is lovingly shot by cinematographer Sayombhu Mukdeeprom. The colors are muted, and natural. He just lets it be what it is. If you don’t want to travel to a small Italian villa after seeing this film, well I can’t help you. You’re beyond help, actually.

The acting perfect. More perfect than anything I’ve seen this year. Chalamet portray’s Elio’s innocence and insecurity while hitting every note. His nominations for Best Actor from SAG and the Golden Globes are richly deserved. Armie Hammer has done a lot of big budget “tent pole” style films like THE LONE RANGER and THE MAN FROM UNCLE. But he has also been unafraid to take risks, like playing the Winklevoss twins in THE SOCIAL NETWORK. But he has taken a huge leap forward here. Oliver is self-assured but reluctant to succumb to his feelings for Elio. Hammer cloaks it in bravado and it is a spectacular choice. Michael Stuhlbarg also turns in a wonderful performance as Elio’s father and delivers a soliloquy towards the end of the movie that should be copied and given to every parent as a lesson on how to love your children.

The music is also outstanding. Sufjan Stevens provides three wonderful songs. But the rest of the score pieced together by Music Consultant Gerry Gershman and Music Supervisor Robin Urdang compliments the visuals and story perfectly.

Looking back, I’ve used the word “perfect” a lot. It is well deserved. CALL ME BY YOUR NAME is very nearly a perfect movie. I cannot find much in the way of flaws, at least none that takes away from the enjoyment of this spectacular film.