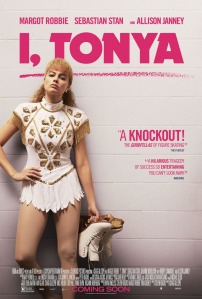 The question I asked myself when I walked out of I, TONYA was, “can a movie about abuse and domestic violence be funny?”. It may leave you uncomfortable, but there is no doubt there is a lot of laughs in here. But you have to remember what is really going on.

I don’t even believe I have to remind everyone of the plot, but I will anyway. Tonya Harding was a redneck who became America’s best figure skater. She was a talented athlete. The first to land a triple axle in competition. She was also a complete mess. Her mom was abusive. She married Jeff Gillooly, who seemed to love Tonya, but also beat the crap out of her. His friend was the completely delusional Shawn Eckhardt. Gillooly and Eckhardt conspired to attack Harding’s main rival Nancy Kerrigan who was knee-capped before the National’s in Detroit about 6 weeks before the 1994 Olympics in Lillehammer, Norway.

What you may or may not know is how much of a shit-show Harding’s life was. Her mother LaVona was a complete nightmare. She emotionally and physically abused Tonya her entire life. She forced her into figure skating then made her feel like she was doing her a favor. She hit her and tormented her. She is a completely horrible human being and should not have ever had children. The absolutely wonderful Allison Janney gives a perfect performance as LaVona. By the end of the movie you absolutely loathe her. Usually, these characters have some kind of internal conflict. Not here. She is beyond sympathy.

Screenwriter Steven Rogers and Director Craig Gillespie made an interesting choice. They did the film as sort of a mockumentary. The actors portray themselves in interview, 20-plus years after the fact. And they try to explain away their roles or motivations just like a real person might. It’s kinda brilliant. The movie is filled with humor, especially when they get to the plot directed at Kerrigan. But, they are quite possibly the stupidest criminals ever to conspire. They left a trail a blind detective could follow. It’s hilarious.

The aesthetics and attention to detail are also wonderful. If you are a fan of A&R rock and pop from the ‘70’s and ‘80’s run out to buy the soundtrack. It’s wonderful. The skating costumes are kitschy and nostalgic. Harding famously didn’t have money to buy costumes so they were sewn by her mother and later herself.

The casting is interesting. Margot Robbie does a fine job playing Tonya. She’s much taller and physically more attractive than Harding. They try to “ugly” her up. Robbie is 5’6” and Harding is only 5’1”. So they shoot her in a way so she doesn’t tower over her co-stars while she is wearing skates. But it’s hard not to notice that objectively, Robbie is better looking. Sebastian Stan plays Gillooly. Paul Walter Hauser does a great job playing the doughy nincompoop Eckhardt.

None of that matters in the end. This is a funny, compelling movie. Janney better get a nomination for Best Supporting Actress. She should get an Oscar to pair with all her Emmys. It’s worth seeing just for her performance. But there is so much more here to hold your attention and keep you entertained. The movie goes for that elusive triple axle and nails it.