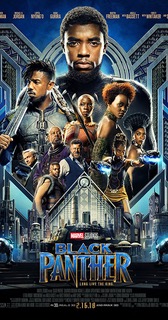 Marvel has taken a shotgun approach to the themes of its movies. From the self-serious (any Captain America movie) to the ponderous (any of the Avengers movies). From the comic (Guardians of the Galaxy 1 & 2) to the meta (Deadpool). Rarely have they touched on any subject that is of great import to current society in a real way. That is until now. BLACK PANTHER checks that box in marvelous fashion.

I’ve spent days attempting to write this review. Then i realized I cannot fully appreciate how great it is or may be. I cannot fully appreciate the messages it is sending about being black in 2018. I never could. I can be empathetic to its message. I can understand the points it is trying to make but I can never feel it in my bones. And this is a film that is deeply felt. Again, that is very weird for a movie in the superhero genre.

Marvel seemed to be taking a chance in handing the reigns of this origin story to Ryan Coogler who has made exactly three full-length feature films. But was it really that much of a risk? He is the young genius behind FRUITVALE STATION and CREED. It should have been safely assumed that this would be the most thoughtful, socially significant Marvel film we’ve seen.

What really helps focus this film is the goals of the heroes. King T’Challa is not trying to save the world, just his little corner of it. We first learned about Wakanda in CAPTAIN AMERICA: CIVIL WAR. We saw his father die in an attack on the United Nations and learned a little about Wakanda’s rich deposit of Vibranium, the material Cap’s shield is made from.

There are several tension points. T’Challa’s (Black Panther) internal struggle on how to be a good king, a job he was not quite ready to assume. There is pressure from Wakanda’s tribes on what kind of country they want to be. Continue hiding in plain sight from a world that believe it to be a third world African nation or share its secret power to help lift the oppressed. That conflict is put to the test when Eric Killmonger shows up to challenge T’Challa’s right to the throne. Killmonger’s goals may align with those who want Wakanda to reveal itself, but his motivation comes from hate not altruism. This thoughtful script (co-written by Coogler and Joe Robert Cole) raises issues of isolationism, nationalism, jingoism, racism and altruism that are prevalent in modern American society. It is nearly impossible not to notice the parallels.

And all this is wrapped in a great superhero movie. As I’ve written before, one of the things I want to see in these movies is the main guy using his powers. There are several great set pieces featuring Black Panther being his Black Pantherist. There is cool tech on display and the hero being, you know…heroic. They are not destroying worlds or demolishing cities. it’s small and wonderful.

The cast is simply amazing. There is not a weak performance to be seen. Chadwick Boseman does great work as Black Panther. He is thoughtful, but not weak. Confident but not cocky. The other highlights for me were Letitia Wright (T’Challa’s sister Suri, who is also the genius behind Wakandan tech), Michael B. Jordan (Killmonger), Daniel Kaluuya, Danai Gurira (Okoye, the head of the Dora Milaje an all female unit in charge of protecting the King) and Winston Duke. That’s not to diminish the other performaces, but those all were a notch above.

I feel odd talking about it being a nearly all black cast. That shouldn’t be a thing we have to mention, so now that I have I won’t talk about it again other than to say BLACK PANTHER’s shattering of box office records should put to bed any notion that race has any impact on those who buy tickets. If the movie is good, they will show up no matter what.

BLACK PANTHER shatters so many stereotypes, all while being politically current and entertaining. That is what makes it a film you must see.