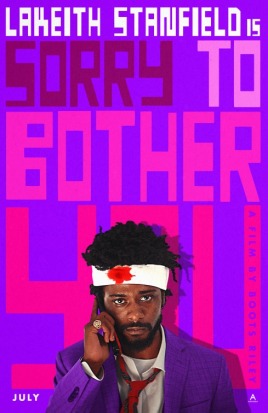 GET OUT was last year’s ground breaking movie that was of a genre but really a biting social commentary. It was so good it won Jordan Peele a Best Original Screenplay Oscar.

This year that torch has been passed to SORRY TO BOTHER YOU. Where get out was chiefly about race and racism, S.T.B.Y. touches on a smorgasbord of injustice. Boots Riley hits racism, sexism, classism… really all the “isms”. It addresses being “othered” unlike any movie you’ve ever seen.

Every performance is standout. Lakeith Stanfield (ATLANTA and GET OUT) is wonderful as underachieving Cassius Green. But he seems to be underachieving because of outside forces. His girlfriend is an artist expertly played by Tessa Thompson. You have to watch her scenes just for the social protest earrings she wears all the time. Every scene is a different commentary through her accessories. Those are the stellar, breakthrough performances.

The movie address the rights of workers, the inherent racism of a workplace, discrimination against lower classes and the evil of mega corporations. So, a full plate. But it is never oppressive with its message. You get it.. it gets that you get it and moves on.

Boots Riley has had a full career as the leader of the Oakland Hip Hop collective The Coup. This is his first movie that was years in the making. It was well worth the wait. SORRY TO BOTHER YOU is fun, funny and through provoking. And sometimes it is just flat out bonkers. It’s a movie that sticks with you and that you want to see again in case you missed something the first time. If it doesn’t receive the same recognition as GET OUT, Hollywood’s nods to inclusion are complete bullshit.