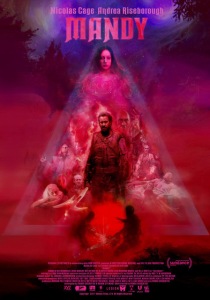 MANDY is the definition of bonkers!

A friend recommended I check it out. It was $6.99 on Amazon Prime so I figured, why not? I’m glad and not glad I watched it.

Here are the basics. Nicolas Cage and Andrea Riseborough live in the Oregon wilderness in the early 1980’s. He’s a logger. She runs a general store-type shop and draws. They seem blissful. Not far away is a religious cult lead by pseudo-Jesus Linus Roache (a role so far from his Law & Order days so as to be nearly unrecognizable). Roache spots Mandy (Riseborough) on the road one day and must have her. So, the cult recruits a bunch of drug-addled, maniacal, blood-thirsty bikers to kidnap Mandy. She is drugged and brought to Roache for her first “encounter”. Things don’t go to plan and she is killed, right in front of Cage who is tied up. They leave Cage to suffer or die or something and take off. Cage escapes, fuels his rage with a bottle of Gin or Vodka and sets off on a blood soaked course of revenge. First he gets a crossbow from Bill Duke (who he is, isn’t fully explained), then fashions at sort of Klingon Bat’leth (great blacksmith “porn” if your into that sort of medieval thing). So you know there’s going to be blood and lots of it. Next stop is the biker gang who first kidnaps him, then he breaks loose (he’s really good at that) and kills everyone. Body parts fly, gallons of blood are spewed all over Cage’s face and he tastes some kind of LSD-type drug that further fuels his mania. Next he visits some guy in the woods who clues him in on where the cult is. Then it’s revenge time!

This all sound outright bananas. And you’re right. It is. But director/screenwriter Panos Cosmatos makes it all work. I’m not saying it’s a great movie, but I couldn’t pull myself away from it. He and cinematographer Benjamin Lieb do great work with colors and framing. Riseborough has these big eyes which they use to great effect. There are several scenes that are just breathtakingly beautiful (that’s before the mayhem begins).

Cage maybe has 3 pages of dialogue in the whole movie, unless you count grunting and screaming as dialogue. His acting is all in his face, and it’s surprisingly good.

Two days after seeing MANDY, I still don’t know what to make of it. The plot is ridiculous and frankly time-worn. I got a definite, “I’ve been here before” vibe. But the visuals and haunting music turn this into something more than your average revenge-slasher movie. And that is all about the insane vision of Cosmatos.