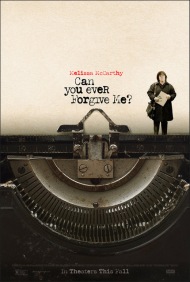 People, well critics if you consider them people, always seem a bit surprised when an actor known chiefly for comedy takes on a dramatic role and kills it. There is a worn out quote that goes, depending on who you hear it from, “dying is easy, comedy is hard”. Given that Melissa McCarthy is such a wonderful comedic actor, is it any surprise she is so good in CAN YOU EVER FORGIVE ME? Not to me.

McCarthy’s stock in trade so far has been her over the top physicality. There’s none of that in her straight dramatic portrayal of disgraced author Lee Israel. Israel had some success as a biographer, but as this movie opens she has hit bottom. She has writers block, she isn’t making any money, she has been fired from her copy editing job. It looks beyond grim as she shambles around early 1990’s New York City. Add to that she is the dictionary definition of a misanthrope. She hates people and makes no secret of it. Israel is a totally unsympathetic character. She is “working” on a biography of Fanny Bryce, doing research in a library when she comes across a typed letter, signed by the comedian. She takes it to a rare bookstore and discovers that it is worth hundreds of dollars to collectors. That is the spark that launches her career of forgery and fraud. Israel writes letters from famous dead authors and playwrights like Dorothy Parker and Noel Coward, signs them and sells them. It is a lucrative scam, until she is found out.

At her lowest point she meets Jack Hock (the amazing Richard E. Grant) in a gay bar. The two are fast friends mainly because they are both alcoholic social outcasts. They are drinking buddies, bonded by their social status.. which is none. Eventually she drags Jack into her fraud when she can no longer show her face in these bookstores.

Israel seems to be constantly teetering on the edge of being caught, until she finally is found out. Her motivations are desperation and revenge.. revenge against a society and culture that has disposed of her because of her lack of success and because she is a lesbian. Her belief that she is entitled to more and her complete desperation are the gasoline on the fire that are her crimes.

McCarthy is simply wonderful. Israel’s cynicism is powered by McCarthy’s comedic instincts. Her performance has the timing of a comedy without the jokes. It is a wonderful example of her range and potential as a dramatic actress. The part isn’t really the type that gets the attention of Oscar voters. Maybe it should, because this is an awards caliber performance. There are other fine performances. Jane Curtin as Israel’s agent. Dolly Wells as a shy bookstore owner who has a crush on Israel. But the other shining performance here is Richard E. Grant’s turn as Jack. He’s cheeky and funny. He tries hard to be Lee’s friend but cannot set aside his basest impulses. There have been a lot of good supporting performances this year, but this is the best I have seen thus far.

The script by Nicole Holofcener and Jeff Whitty was adapted from Israel’s book about this period of her life. It is spare and sharp. It’s witty without being too precious. Great writing. This is director Marielle Heller’s second feather (2015’s THE DIARY OF A TEENAGE GIRL was her first). Heller’s best attribute here is that her direction isn’t in the way. It’s not noticeable. She picks the right shots to show Israel’s desperation. It’s subtly great.

CAN YOU EVER FORGIVE ME has nothing to apologize for. This is a great movie that should be recognized during awards season.