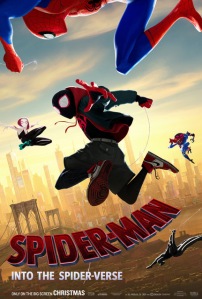 While most movies in the Marvel Cinematic Universe have been wonderfully entertaining, they are missing something. They turn the comic book character into a real life person and as good as Marvel is at doing that, something always feels like it’s missing. No amount of CGI or green screen work can truly capture the feel of a comic book. With SPIDER-MAN: INTO THE SPIDER-VERSE, problem most definitely solved.

The tone, the look, the characterizations are all perfect. You feel like you dove right into an edition of Spider-Man. But it’s not just the completely fabulous animation. The story is compelling. It is yet another Spider-Man origin story, but it is completely different.

This is not Peter Parker’s origin, it is Miles Morales’ story. How he became the hero. Now, the movie does start with Peter Parker’s story.. but it is more of a quick re-cap, completely with acknowledgment of Spidey’s sometimes dicey film history (complete with a nod to the weird Tobey Maguire strut down a New York City Street in Spider-Man 3). Then that quick re-cap becomes a “thing” as the story evolves. The story… wow. Totally compelling. Miles, like Peter, is a smart kid. He’s at a magnet school in Brooklyn, but he is having trouble fitting in. His police officer father is demanding, but Miles has more of a connection with his Uncle Aaron who has a dicey relationship with his brother. That leads Miles, the graffiti artist to a subway tunnel where he is bitten by the spider that will change his life. It’s hard to describe the web of the plot without the visuals. But it totally works when you watch it. And that’s kinda important in a movie.

Even the villains are acting out of a sense of heart and purpose. Kingpin is trying to get back his dead wife and son by opening a portal to a parallel reality. That event dumps a bunch of Spider-Men into Miles’ timeline. They must team up to stop Kingpin and save the world. But no one thinks Miles is ready, and he must find his own way to use his unique powers to save the day.

The movie has a ton of heart and treads on Pixar’s territory by delivering a message while being fabulously entertaining. In many ways it does it better than a bunch of Pixar movies. The animation and feel draw you into the message without bludgeoning you with it. It is entirely compelling.

And the voice cast.. more WOW! Shameik Moore is fantastic as Miles. If it was just him it would be excellent. But the rest of the cast is a smash hit. Bryan Tyree Henry is Miles’ father. Mahershala Ali is Uncle Aaron. Liev Schreiber is Kingpin. Kathryn Hahn is Doc Ock. Lily Tomlin is Aunt May. And the Spider-Men from the other realities are Hailee Steinfeld, John Mulaney Kimiko Glenn and Jake Johnson. Spider-Man from Miles’ reality is Chris Pine. Johnson’s sad Peter Parker is the version we have needed for all of time. Pine’s is more “heroic”. Johnson’s is real. There is not a bad performance in the bunch. SAG or the Academy needs to acknowledge the talent it takes to do this kind of acting.

The adaptation by Phil Lord is spot on. The direction by Bob Perischetti, Peter Ramsey and Rodney Rothman could not be better. See it in 3D.. it’s really the only way. The soundtrack.. the score.. there is nothing not great about this.

Here is my wish… that Marvel and DC use this as an example of what this genre of movie can be. Forget the live action version of these movies. With Avengers: Endgame coming next year, it is the perfect time to shift. These comic book characters deserve this treatment. And so do their fans. It is really the only true way to bring these stories to the big screen. SPIDER-MAN: INTO THE SPIDER-VERSE should be seismic shift for Hollywood. Let’s hope it is. They have great power to do the right thing.. will they take the responsibility and do it? Here’s hoping they do.