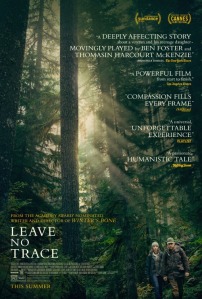 I first became aware of Debra Granik with the remarkable WINTER’S BONE. It put Jennifer Lawrence on my radar, and gave her the cred she would use to become one of the best actresses in the world. She was nominated for a best actress Oscar in 2011 based on her remarkable performance. I, like many others, became enthralled with Lawrence almost to the exclusion of Granik. Looking back now, it’s hard to believe Granik’s dark, yet inspiring story about a teenager trying to track down her father while keeping her family together didn’t win more awards (THE KING’S SPEECH won best picture, Natalie Portman won best actress for BLACK SWAN, and Aaron Sorkin won for adapted screenplay for THE SOCIAL NETWORK). Then Granik all but disappeared.

This year she is back with another incredible movie, LEAVE NO TRACE. It is another moving story about being an outsider and trying to live life on your own terms. Ben Foster is Will, the father of a 13-year-old daughter. They are living off the grid in an urban forest just outside of Portland, Oregon. It is the only way he can keep his head together. Will is a veteran with PTSD, who wants little to do with society. He believes he can give his daughter, Tom (Thomasin McKenzie) a better life off the grid. They are happy until a chance encounter with jogger alerts authorities to their presence and suddenly they two are thrown into the system.

The film deals with how the two of them adapt. Will tries to fit in, but he cannot do it. Tom on the other hand is making a more serious effort. She starts to make a friend. She seems to be adapting at a slow pace. Then, Will decides they must leave. They are already too integrated into society for his liking, and for his sanity. They leave again in the middle of the night. This time something is different. Tom doesn’t seem to understand it. They wind up in southern Washington.. in a cold and rainy forest that almost kills both of them.

Will is constantly running from his illness. He has episodes in the middle of the night. He is in denial that his lifestyle can save him and he is dragging his daughter along for the bleak ride. But, Tom loves her father too much to abandon him until she realizes that she cannot live his life. She cannot survive. Despite their love, she must let him follow his own path. Even their love cannot fix him. That all plays out in a heart wrenching final scene.

Granik’s story is quiet and powerful. It speaks to love and desperation. It acknowledges that love may not be enough to solve every problem. Granik’s screenplay and direction along with cinematography by Michael McDonough are perfect. It is a postcard for the beauty and danger of the Pacific Northwest. Granik’s camera spends a lot of time on Tom’s reactions and Will’s pain. It is gorgeous and effective. But, it wouldn’t work without two outstanding performances. Foster deserves an Oscar nomination that he may miss out on because of the timing of LEAVE NO TRACE’s release. Out of sight, out of mind. This is the first major American role for Thomasin McKenzie, a young actress from New Zealand. She is incredible. Maybe Granik is the “young actress whisperer”. She has identified a young talent (McKenzie is 18), who definitely has a bright future.

Granik has made only 2 other fictional movies (DOWN TO THE BONE and WINTER’S BONE) before this. So when she decides to grace us with another example of her amazing storytelling ability, Hollywood should stand up and take notice. I wish she would give us more. But maybe we should just be thankful for the gifts she delivers every so often. Because, LEAVE NO TRACE is definitely one of the best films of 2018.