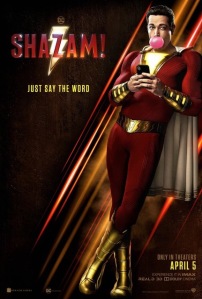 When I was kid, late on Saturday mornings there was a live-action series on CBS title SHAZAM! It featured a 17-year-old kid with long, late ’70’s hair and his mentor who would drive around the country in a Winnebago, helping those who had been wronged. Billy Batson was the kid and when the situation called for super powered help he’d yell SHAZAM! and he would transform into the red-suited Captain Marvel. It was corny, but I liked it. Now some 40 years later, he’s back!

This version is decidedly different than that old show I enjoyed so much. Here Billy is a younger kid who has no one to guide him. He is a foster kid who has bounced from home to home since he got lost at a fair when he was very young. The name Captain Marvel is not spoken, for logical conflict of interests reasons with Marvel’s version. Instead the hero, played by Zachary Levi is SHAZAM!. The 1970’s show was played straight.. this one is played for laughs more often than not. It’s a refreshingly light touch for DC.

I had heard great things about the movie so I was looking forward to a 2 hour plus thrill ride. I walked out somewhat satisfied, but mostly disappointed. The tone of the movie is fine and Levi is great as the goofy super who is just learning his way around the hero game. Asher Angel is also more than good as Billy. I guess my problem is Levi’s goofiness overwhelmed Angel’s innocence. I needed more reason to believe Billy was worthy of this responsibility.

There was one plot hole you could drive a city bus through. The main problem is with the bad guy. Mark Strong is a great actor and he plays the “bad” better than just about anyone. He glowers, he has the menacing growl in his voice. I’m a fan. His origin story was fine, I got it. He didn’t get the power he was promised and obsessively pursued it for his entire life. But when he stole those powers we got no explanation about the 7 sins and who they were and why they existed. We’re just left to believe they are bad. And why were they sins? They demonstrated no sinful behavior. They simply destroyed and killed seemingly just because Strong’s Dr. Sivana wanted them to. It was a real head scratcher. Questioning the purpose of the villain leaves the audience wanting.

Also Dijimon Hounsou’s character is a wizard. He was part of the council of Wizards, but he is the only one left. We kind of got a story about what happened to the others. But why are they Wizards? Where did magic or wizardry come in? There is absolutely no evidence of it other than the Wizard telling us it is so.

Billy’s story worked. His realization about family motivated his heroism. The transition of his foster brothers and sisters was awesome. And the ending was satisfying.

Oh and the mid-credits scene was completely baffling. It seemed to set up the next movie but used a character you really had to think about to remember whether he was even in the movie (spoiler, he was).

I’ve made this point over and over. Origin stories are tough. You have to service the back story and the transition. It’s a lot to stuff into a movie. Each filmmaker feels it necessary. It does create an arc for the hero, but maybe there are better ways to execute it. It took nearly an hour before Billy finally got his powers. That was too long and it was very slow until that point.

I hope they iron out these issues before the next time Billy yells SHAZAM! to save the world. Because the bones of a good franchise are there and with some care this could be a great story going forward.

I’m always apprehensive when I sit down to watch a movie in the DC cinematic universe. They have been wildly inconsistent, tilting toward bad for the most part. Really, the best in the series was WONDER WOMAN. So, the mixed reviews for AQUAMAN activated that early warning system in my brain. Maybe it was those reduced expectations that enhanced my enjoyment, but I like AQUAMAN.

Sure there are some difficulties here. Origin stories by their nature go deep in the weeds (or sea weeds in this case). Sometimes it’s a little too much information. Viewers want to watch the hero be heroic, not learn about the political history of Atlantis. I get why, but there’s got to be a better way to serve that information. Maybe hand out viewer guides ahead of time, or suggest reading material to peruse before you walk into the theater.

I also had a Transformers-style problem with some of the climactic action sequences. They were hard to follow and not least because they took place in an unfamiliar environment— under water. Viewers need less frenetic action and more meaningful set pieces. Give us stuff that services the story not the endless list of computer technicians and software engineers that are listed in the credits.

But those were my only problems with the movie. I thought Jason Momoa was fantastic. He brings the right amount of badassery and balances it out with humor. I believe he is Aquaman. The other surprise was Amber Heard. She and Momoa had great chemistry. They played well off each other. They were in rhythm and I believed their relationship was real.

Other than the fighting scenes near the end, the underwater world created by director Ruben Fleischer and his team was spectacular and beautiful. The choice of Patrick Wilson as the big villain was odd, but he’s such a good actor it worked. It was great to see the Black Manta character show up and be portrayed with such clear motivation. Revenge is always a winner.

Overall I had fun with AQUAMAN. It didn’t drown in outsized expectations or in themes that were too dark (that note is once again for you Zach Snyder). It was what you want from a superhero movie and I look forward to seeing a more streamlined version next time.

Here you go.. the first look at Episode IX.

And here’s some details: