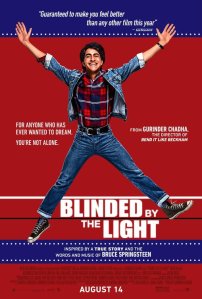 Bruce Springsteen, throughout his career has been seen as the voice of the working man. But in his one man show SPRINGSTEEN ON BROADWAY he admits it is all based on a lie, saying he’s never worked a day in his life. He admits the characters in his songs are people he grew up with, friends and family. But that doesn’t make his voice less authentic. Springsteen, like many great artists is an observer and chronicler. Maybe that’s why the main character in BLINDED BY THE LIGHT connects so intimately with him once he discovers Springsteen’s music.

Javed Khan is not an observer by choice. It is a role life has saddled him as Pakistani living in Britain in the 1980’s. He is not comfortable. He has reason not to be. He has but one close friend, the aspiring musician Matt. Javed is too shy to even ask a girl out. His strict Pakistani family wouldn’t allow it anyhow. His father takes all the money Javed earns in his summer job for the family. Family and following Pakistani tradition are everything to his father. But Javed sees his peers living a modern life and he observes and chronicles that in the form of journals he has kept for 7 years. He writes songs for Matt’s band but they are political, observing the injustices of Margaret Thatcher’s government and the bigotry of the New Fascist movement. Matt wants love songs, but Javed cannot write them honestly.

When Javed is handed two Springsteen tapes (Darkness on the Edge of Town and Born in the U.S.A.) by a Sikh friend he takes them but doesn’t listen to them right away. Later that night, alone in his room Javed begins listening and it awakens something inside of him. It is revelatory. He wonders where this voice has been all his life. Director Gurinder Chadha surrounds Javed with the lyrics from Springsteen’s songs. It is a great visual representation of the moment when you discover a band and fall into the rabbit hole of their music.

That begins a journey of discovery for Javed. Discovery of Springsteen, but also a discovery of what he really wants out of life. He doesn’t want to follow his father’s rules or plans. He becomes the rebel he is hearing about in the music. The movie celebrates that in a couple of set pieces where Javed sings and dances with his friends through the streets of Luton. That theme and style fills about half the movie.

Then,Chadha abandons that in favor a more traditional telling of a family and political drama. Javed rebels and it costs him. Violence erupts when a wedding celebration runs into a march by the British Ne-Nazis. That costs him too when he misses the confrontation that leaves his father bloody because he is off buying tickets to a Springsteen concert.

That shift in tone of the movie feels real and necessary, but it also means the film is inconsistent. The first half feels a little corny and that makes the seriousness of the latter half a bit jarring. There is once sequence where Javed wins a writing contest and flies to Monmouth College in New Jersey for a conference. That is very close to Springsteen’s home town, so he visits a bunch of locations that are iconic in Springsteen lore. It is weird and fells like fan service that is dropped into the movie. Didn’t work at all.

The characters are all thoughtful and well drawn. Javed’s internal conflict is obvious even if it is a bit of a movie trope about rebelliousness. His father isn’t simply an authoritarian figure. He feels like he’s failing his family when he loses his factory job and cannot pay for Javed’s sister’s wedding. Matt is a caricature of ‘80’s Brit-pop, complete with the hair and clothes (think Flock of Seagulls), but he is hurt when his tastes are questioned. Javed’s younger sister seems like the good daughter, but secrets away with friends to cut school and go to a “daytimer” (a party where they literally let down their hair). That is what saves this movie from being ridiculous. You care about the characters, what they want and how they are going to get it.

I am a huge Springsteen fan. I have seen him in concert 10 times, yet that is nothing compared to some of his rabid fans. I would show up for any movie that features his music. The fact that this is based on the real life of Safraz Manzoor made it all the more interesting to me. While it mostly works, there are stylistic choices that take you out of the story. This could have been much better. Bruce sings in The River, “is a dream alive that don’t come true, or is it something worse”. This is a dream that came true, yet it doesn’t feel fully alive. And that is something worse.