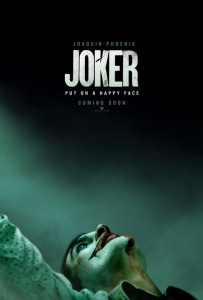 JOKER is either the best movie ever made, or an overrated piece of crap. As usual, the truth lies somewhere in between. It is a film that starts dark and just keeps getting darker. It is unrelentingly bleak. Every time you believe that maybe, just maybe Arthur Fleck has found a way out from under his own mental illness, the world turns on him.

There are undeniable parallels to KING OF COMEDY. A struggling comedian becomes obsessed with a beloved pro. As the fandom turns to obsession the main character falls prey to his own psychosis. To further the parallel in King of Comedy Robert De Niro is the fan… in JOKER he is the target.

The commentary on society is undeniable. The mentally ill are ignored or given the least amount of attention possible. The wealthy present themselves as entitled jerks who don’t care a whit about most people. In interviews around the release of the movie Director Todd Phillips commented he no longer can make comedies because of “woke culture”, people are too easily offended. Explaining how silly that is seems beside the point. Phillips just can’t make the bro comedies (The Hangover movies for example) that he did when he was younger. Whatever Todd. But he seems to be taking a shot at all the wokeness. De Niro’s Murray Franklin makes fun of Arthur which sends him spiraling deeper into madness. A sort of, “see what happens when people become too offended, they go nuts!” Again, whatever Todd.

Joaquin Phoenix is unbelievable. As an actor he is willing to transform himself emotionally and physically, much like his co-star De Niro. He lost a ton of weight for this role. He is emaciated and gaunt. His physicality as an actor is something to behold. He just doesn’t “act” crazy, he moves crazy. Watching him run you think to yourself, “yup… dude is not well.” It’s such a wonderful performance that at points you really feel for Arthur even as he falls deeper into madness. Is what we are seeing real? Or are we so deep inside Arthur’s insanity that even the audience can’t even tell what is real or what is not. The audience is on board the crazy train right next to your main character. It’s a powerful and unique way to build a connection with your main character.

The music cues are either on point or eye rolling. I’ll leave that to you to decide but I didn’t even notice it. The visuals of the movie are mostly grey and dirty which adds to the bleakness. The only real color enters when Arthur fully embraces his transformation to Joker.

This is a depressing take on an origin story. Some have lumped it into the Superhero genre. While that is clearly what Phillips is counting on that connection to draw you in, it is not at all of a piece with a Marvel or DC film. This is a drama about someone losing their mind. It is powerful and disturbing. It took me weeks to come to terms with its themes and now that I have, I am all in. JOKER is definitely worth your time.