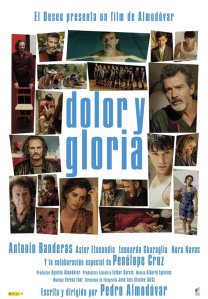 How much pain must one endure to achieve glory? And when glory is bestowed does the universe demand pain to keep things in balance? These existential questions came to mind after I watched Pedro Almodóvar´s brilliant PAIN AND GLORY.

Antonio Banderas stars as a filmmaker named Salvador Mallo who had success back years earlier, but is now a broken shell. His body is fighting him. He’s had spinal fusion surgery. He’s in constant pain. He has other ailments that have forced him to become a recluse. As we learn more about Salvador, we also learn about his history growing up poor and at one point living in a cave with his mother (Penelope Cruz). He was a brilliant, talented child who tutored an illiterate man and taught him to read.

Almodóvar explores pain as it is channeled through Salvador. What caused his emotional pain includes a failed love affair at the time he was making his critically acclaimed movie and a falling out with the star of that movie. He begins his healing by trying to reconnect with that star for a festival screening. But instead of healing he becomes addicted to heroin. That actor (Asier Etxeandia) discovers a writing on Salvador’s computer about addiction. He initially refused to allow him to turn it into a one man show, but Salvador relents and that is when the real healing begins. He reunites with his former lover, a man who moved to Argentina, married and had a child. He begins to seek real treatment for his ailments and begins working again.

Banderas, Cruz and Etxeandia are wonderful. You can see the pain on Banderas’ face…. Feel it in your bones along with him. Cruz is warm and loving as his young mom. And Etxeandia is all passion and energy.  Three wonderful performances.

Every relationship in the film is troubled but ultimately touching and intimate. Almodóvar reveals pain and how it is resolved or forgiven. There are no easy answers… no short roads to redemption. But in the end Salvador finds his way back from his personal abyss. This exploration of the price one must have to pay and the work one must do to redeem oneself internally and externally will have you thinking and ultimately giving a virtual pat on the back to Salvador.