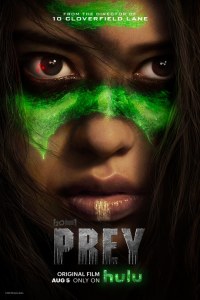 There are several movie franchises I have intentionally avoided. Most of them horror since that is really not my jam. I find the jump scares, peril and gore overwhelming. I am trying to escape all that when I sit down to watch a movie. One of those franchises is the Predator movies. The original and the Alien v. Predator sub-franchise. Just had no interest.

So it was with some reluctance I clicked on Hulu to watch PREY. Is this for me? Will my anxiety be ramped up from its normal “constant freak out” level? Trepidation to be sure. But several people suggested it, glowing reviews and an interview with director Dan Trachtenberg told me to put aside those reservations. And boy am I glad I did.

There is some of what makes the hair stand up on the back of my neck. A decent amount of gore and jump scares. But this is so much more than what scares you. The story of a young woman struggling for respect resonates across the centuries. The concise storytelling is refreshing in an age when these kind of projects are either more than 2-and-a-half hours or 9 episodes long. I got a clear picture of the main character’s backstory and motivation within the first 10 minutes or so. I understood the threat soon enough and it was all dealt with in just over 90 minutes. There is something to be said for a short, well told story.

It doesn’t hurt that Amber Midthunder is absolutely phenomenal as Naru, the young Comanche woman who wants more for herself than staying home learning the ways of medicine. She wants to hunt with the men. And we quickly learn she is good at it, and smarter than some of the more experienced hunters. Most of the movie leans on Midthunder’s character and she is more than up to it.

The members of her community are also very good, including her brother Taabe played with equal measures of bravery and sensitivy by Dakota Beavers. Dane DiLiegro is the Preadator. I don’t know how much of his character is VFX versus practical effects, but he does a great job giving us just a little bit of feel for what the Preadator’s goal is, what he may be “feeling”. It’s quite a trick to do that when you don’t have any actual lines.

I know Trachtenberg’s work from the first season of The Boys. He directed the pilot, or first episode “The Name of the Game” and set a tone for what might be the best superhero property out there. Trachtenberg knows how to shoot action without making it confusing or hard to follow. You feel you are there but not getting nauseous because the camera is too close. He also has a knack for showing his characters at their best even when the situation is the worst. Also special shout out to the score by Sarah Schachner who builds on Alan Silvestri’s original theme and combines it with Native American themes.

If you are a, well let’s face facts, a scardy cat like me. This movie will not prey on your anxiety and to not watch it is to miss something quite special.