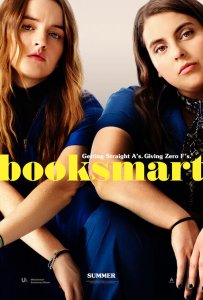 I have read some reviews that call BOOKSMART a female Version of SUPERBAD. I don’t know how true that is, but let’s allow this wonderful movie stand on its own merits.

There is so much to love in this film, let’s start with the story. Two high achieving high school seniors think they are the best in their school. Hard to argue they aren’t. Molly (Beanie Feldstein) is the class president and is headed for Yale. Her best friend Amy is an out lesbian who is going to Columbia, but not before going to Botswana for a year to help women’s health. They believe they are the best among losers. But, Molly’s chance encounter with three classmates make her realize she and Amy have blown it. The three are going to Yale, Stanford and getting a six-figure coding job with Google. Molly’s plan–make their last night before graduation an epic one.

What transpires is madcap, hysterical and emotional. Molly pushes Amy out of her comfort zone. They’re friendship is pushed to its limits and then break boundaries and at least one law. They realize their classmates are not the losers they thought. In fact, some are pretty cool, and there are regrets about not exploring friendship and love anytime before that one night.

All that would be it ok if not for two things: The outstanding cast and Olivia Wilde’s direction.

Beanie Feldstein is a genius. She plays each comic moment perfectly, she doesn’t overplay or underplay it. Her timing is perfect. But the quiet or more dramatic moments play just as true and real. Feldstein had a small, yet important, role as Saorise Ronan’s best friend in LADY BIRD. That’s where you first saw what is possible. Now that potential is fully realized. Kaitlyn Dever is fantastic as Amy. She shows a vulnerability and insecurity that defines Amy and makes her character’s development all the more satisfying. Billie Lourd is a genius. Her turn as the weirdo Gigi is perfect. The character is one note, but that doesn’t mean she doesn’t eat up every scene she is in. The rest of the cast who play the students are fine and serve their purpose of acting as fodder for Molly and Amy. There are also great small performances from Jessica Williams, Jason Sudeikis, Mike O’Brien, Lisa Kudrow and Will Forte.

As good as Feldstein is, the real breakout here may be Wilde. After directing music videos and some smaller projects, this is her first big movie. And she is more than up to it. She is not afraid to take chances (see a drug / trip-out scene like none you have seen before]. But delets scenes breathe, she doesn’t try to impose a style. Wilde just point the camera and trusts her cast and a good script from Susanna Fogel, Emily Halpern and Sarah Haskins. I cannot wait to see what is next.

Combine all that with a great soundtrack and you dare a really well done) funny summer comedy. In a world where sequels and remakes dominate. Book SMART is a welcome breath of fresh air.