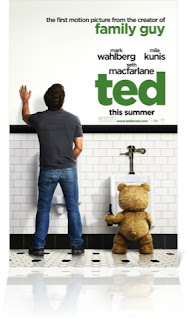 If you’re a fan of “Family Guy” like I am, then you were probably counting the days until TED hit theaters. A live action movie from Seth MacFarlane? Freakin’ Awesome! (read that in a Southie accent). My only fear was being let down. Nothing to be afraid of here. TED has the same pop culture/gross out/politicially incorrect humor as Family Guy and American Dad, just with a lot of four letter words thrown in. The surprising thing is the movie’s heart. The characters really care about each other. Even TED, who has no real beating heart, loves his friends (when he’s not getting baked, drunk or carousing with hookers). The jokes won’t make you wet your pants, but the more touching moments may wet your cheeks. Mark Wahlberg plays straight man to TED really well. The timing between him and MacFarlane(Ted’s voice) is spot on. Mila Kunis is good, but merely a vehicle for Wahlberg and Ted. That’s a bit disappointing, but not a big deal. Giovanni Ribisi plays the creepy bad guy too well. Lots of cameos from Ted Danson to Ryan Reynolds to Sam Jones (look up who that is.. it’s key to the plot). In a world of gross out comedy and Adam Sandler unfunniness, TED is a breath of fresh air. A comedy that’s funny, with heart, that isn’t a cliche. I want to hug the stuffing out of this movie! — Alan Yudman

TED is a fraud. While undeniably funny in spots, it promises an
acerbic rejection of romcom cliches, then lacks the courage to follow
through. What results is an audience feel-good movie that can’t even
deliver the mature message of the superior (and similarly themed) TOY
STORY 3. In the latter Disney film, Andy relinquishes his toys with
respect (ultimately) and the knowledge that it’s time to move on. In
TED, Mila Kunis tries to convince Mark Wahlberg to do the same, for
the same reason. But the filmmakers opt for a pointless happy ending
in which everyone gets everything they want in what seems like a
marketing ploy to send audiences back out into the world smiling. Does
it work? At the packed theater where I saw the movie, long stretches
of talky inaction felt deflating. Nor was there applause or excited
chatter at the end. Most of the laugh-out-loud moments can be found in
the (red band) trailer, creating an expectation that the entire movie
will be a crackup. It isn’t. Yes, the CGI work is quite effective in
giving a plush toy with extremely simple features the ability to covey
human emotions. (The eyes seem to be the key, with the use of shading
or “cloudiness” giving the bear remarkable nuance.) There are also
scenes of physical comedy (on a dance floor, in a motel room) that
punch out some laughs. And director Seth MacFarlane has found the
perfect voice for his titular hero. But I have to say, i was
disappointed. — Jeff Schultz